HomeUSANovavax faces high-stakes FDA review this week that will decide the fate...
USA

Novavax faces high-stakes FDA review this week that will decide the fate of its Covid vaccine in the U.S. 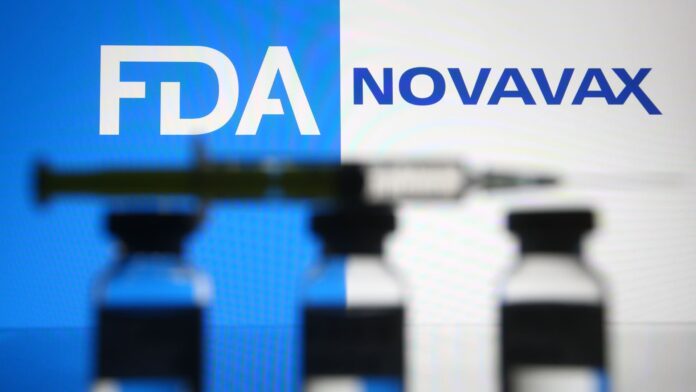 In this photo illustration the Food and Drug Administration (FDA) and Novavax logos are seen behind a medical syringe and vials.

Novavax’s Covid-19 vaccine will face the scrutiny of the Food and Drug Administration’s independent immunization experts this week, a crucial step on the path toward U.S. regulatory authorization two years after the Maryland biotech company received taxpayer funding to develop the shots.

The committee of vaccine experts will weigh the safety of Novavax’s shots and their effectiveness at preventing Covid during an all-day public meeting on Tuesday. If the committee endorses the vaccine, the FDA will almost certainly give the green light for doses to ship from Novavax’s manufacturing partner the Serum Institute of India to the U.S. The company’s shots have been authorized in 41 countries outside the U.S., including Australia, Canada, and the European Union.

“We feel very confident in the data that we have submitted,” said Novavax spokeswoman Silvia Taylor. “If prior success is any indication for future success, we feel really good,” Taylor said.

Novavax was an early participant in the U.S. government’s race to develop a vaccine against Covid in 2020, receiving $1.8 billion from Operation Warp Speed. However, the small biotech company faced an uphill battle ramping up its manufacturing capacity and its clinical trial data came later than Pfizer and Moderna, which developed their shots at breakneck speed are now the dominant players in the U.S. vaccination campaign.

When the pandemic began in 2020, Novavax had 100 employees and no manufacturing capacity, said John Trizzino, the company’s chief commercial officer. Today, the company has the capacity to produce 2 billion doses per year, Trizzino said.

Novavax’s shots are based on protein technology used for decades in hepatitis B and HPV vaccines. Pfizer‘s and Moderna‘s shots, on the other hand, were the first vaccines using messenger RNA technology to receive FDA approval. Novavax believes it can reach people who have not got vaccinated yet, because they would prefer to receive a shot based on technology that has a longer track record, Taylor said.

Pfizer and Moderna’s shots rely on messenger RNA to turn human cells into factories that produce copies of Covid’s spike protein to induce an immune response that fights the virus. The spike is the part of the virus that latches onto and invades human cells.

Novavax, by contrast, produces the virus spike outside the human body. The genetic code for the spike is put into a baculovirus that infects moth cells, which then produce copies of the spike that are then purified and extracted. The spike copy, which can’t replicate or cause Covid, is injected into people inducing an immune response against the virus.

Chief Medical Officer Filip Dubovsky said manufacturing the spike protein outside the human body allows the company to ensure the vaccine is configured in a way that’s most effective at producing an immune response.

“We know exactly what we’ve made and we test it as part of the process of releasing the vaccine to assure that it’s in the right conformation,” Dubovsky said.

The vaccine also uses an adjuvant, an extract purified from the bark of a tree in South America, to induce a broader immune response. The adjuvant has been used in licensed vaccines against malaria and shingles. The shots consist of 5 micrograms of the spike copy and 50 micrograms of the adjuvant.

However, the pandemic and the public health response are in a very different place today than in 2020, which presents Novavax with immediate challenges if the FDA authorizes its vaccine. About 70% of people eligible for vaccination in the U.S. have already received their first two doses, overwhelmingly with Pfizer’s or Moderna’s shots. And the world is now battling the omicron variant, which is very different from the original strain of the virus that emerged in Wuhan, China in late 2019.

Novavax’s adult trial was conducted from December 2020 through September of 2021, before the omicron variant became dominant. There is no data available to assess Novavax’s effectiveness against omicron, which continues to mutate into more transmissible versions of the virus, according to FDA briefing documents published ahead of Tuesday’s committee meeting. However, FDA officials said the two-dose vaccine would more likely than provide meaningful protection against severe disease.

Novavax published a lab study in December that showed people who received two doses had an immune response against omicron, though the antibodies that block infection dropped about fourfold against the variant compared to the original Wuhan strain of the virus. However, a booster increased the protective antibodies about 20-fold against omicron compare to the peak response from the first two doses against the Wuhan strain, according to the study data. The higher antibody levels suggest, though do not guarantee, that a third dose would provide high levels of protection.

Though a majority of the U.S. population is already vaccinated, Novavax executives believe the company’s shots can play an important role as a booster for adults and a primary vaccination for teenagers 12 to 17. Right now, only Pfizer’s vaccine is available for teens, though the FDA will review Moderna’s shots for that age age group on June 14. About 50% of adults have not received a third shot yet, and 40% of teenagers are not fully vaccinated, according to the Centers for Disease Control and Prevention.

The most common side effects of Novavax’s shots were injection site pain, fatigue, headache and muscle pain, according to FDA briefing documents. However, four participants developed heart inflammation, either myocarditis or pericarditis, or abnormal chest pain after receiving Novavax’s shots, according to the FDA. They were all hospitalized for several days though they recovered.

“These events raise the concern for a causal association with this vaccine, similar to the association documented with mRNA COVID19 vaccines,” FDA officials said in the briefing documents. The second dose of Pfizer and Moderna’s vaccines have been associated with an elevated risk of heart inflammation in young men and teenage boys.

Novavax, in a statement, said there isn’t sufficient evidence to establish a causal relationship between the vaccine and heart inflammation. However, the company said it will continuing monitoring for myocarditis and pericarditis during its trials.

It’s unclear how many doses of Novavax will be available in the U.S. if the FDA authorizes the vaccine this week. Novavax initially agreed to supply the U.S. with 100 million doses under its $1.8 bilion Operation Warp Speed contract but some of the funding has been used to support the company’s studies on third doses and vaccines for children.

Trizzino said an initial delivery of shots will be made in the weeks after FDA authorization without specifying an amount. Novavax and the U.S. government have not reached an agreement yet on future orders, he said.

Trizzino said Novavax is looking at demand for a fall vaccination campaign in the U.S., when public health officials expect another wave of Covid infection as people spend more time indoors when the weather changes. The FDA is considering changing all the Covid vaccines to target the omicron variant ahead of the fall to increase the effectiveness of the shots against mild illness.

Novavax launched a clinical trial in late May to study a shot that targets omicron alone and another that includes both the Wuhan and omicron strains. However, the timeframe to update the vaccines for the fall is short. The FDA’s independent experts are holding their second meeting on June 28 to discuss whether a strain switch is needed, which would leave just months for Novavax and the other vaccine makers to manufacture updated shots.

Trizzino said the path to deliver vaccines based on the Wuhan strain or omicron variant alone for the fall is relatively straightforward, but producing shots that include both strains is more challenging under a compressed scheduled. While it’s unclear what the FDA will decide for the fall, Covid vaccines – whether they’re based on Wuhan or omicron or both – will be needed well beyond this year, Trizzino said.

“This virus isn’t going away anytime soon,” Trizzino said. “There’s a high degree of certainty that it will be some kind of annual revaccination into the foreseeable future,” he said.

Women prefer values-based investing. Here’s how that impacts their wealth