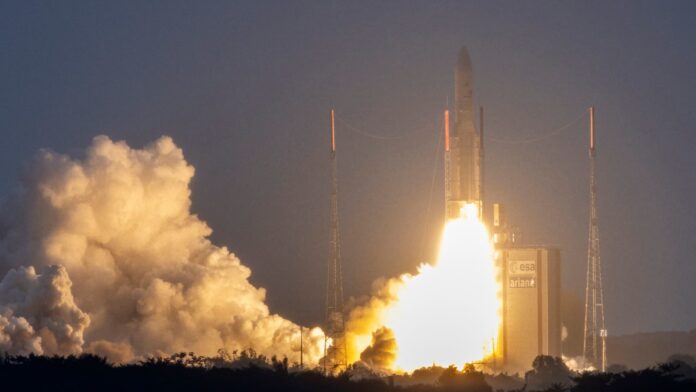 OneWeb, which emerged from bankruptcy in 2020, is hoping the combination with Eutelsat will help turn its fortunes around.

The all-stock merger will see Eutelsat issue 230 million new shares and exchange them for all remaining shares of OneWeb, according to a press release Tuesday.

Shareholders of OneWeb and Eutelsat will own 50% of the combined firm, respectively. The deal values OneWeb at $3.4 billion.

Once united, the merged entity is expected to generate roughly 1.2 billion euros ($1.22 billion) of revenues in the 2022-23 fiscal year, the companies said.

Eutelsat’s Dominique D’Hinnin and Eva Berneke will continue in their respective roles as chairman and CEO of the combined entity, while OneWeb backer Sunil Bharti Mittal will become co-chairman.

“This combination will accelerate the commercialisation of OneWeb’s fleet, while enhancing the attractiveness of Eutelsat’s growth profile,” he added.

OneWeb wants to distribute 648 low-earth orbit satellites that would help beam broadband to rural areas with limited internet access. It currently has 428 satellites in orbit, which will now be combined with Eutelsat’s 36-strong fleet of geostationary orbit satellites.

OneWeb, long touted as a competitor to SpaceX’s huge Starlink satellite internet project and Amazon’s own Project Kuiper, has faced difficulty turning its lofty ambitions into a viable economic model.

The company emerged from bankruptcy in 2020 with the help of the U.K. government, having burned through billions of dollars in venture capital. The government kicked in $500 million as part of a bailout package for the firm.

The startup had also been impacted by a freeze on rocket launches from Russia following Moscow’s invasion of Ukraine, and was forced to turn to SpaceX for support.

OneWeb is hoping the combination with Eutelsat will help turn its fortunes around, with CEO Neil Masterson calling it “another bold step” in helping the company on its mission.

“This combination accelerates our mission to deliver connectivity that will change lives at scale and create a fast growing, well-funded company which will continue to create significant value for our shareholders,” Masterson said.

Investors appeared unconvinced by the takeover Tuesday, with shares of Eutelsat trading at their lowest level since late 2020. Eutelsat said it would temporarily suspend its dividend to focus on deploying OneWeb’s satellite constellation.

The deal is subject to various regulatory approvals, including a strict national security clearance process in the U.K. It is expected to complete by the first half of 2023.

The transaction excludes a “special share” held by the U.K. government that gives it a say on national security matters, including the security standards of OneWeb’s network and the location of its headquarters.

London is diluting its control of the once space venture at a precarious time politically. Members of the ruling Conservative Party are set to determine who will be the next U.K. leader after Prime Minister Boris Johnson’s resignation.

The Tory faithful are sure to want a premier who can defend Britain’s treasured assets from foreign takeovers — especially one originating from the EU — in the wake of Brexit.

The issue of foreign takeovers has become especially sensitive in the context of Nvidia‘s botched attempt to take over U.K. chip designer Arm and the sale of semiconductor firm Newport Wafer Fab to a Chinese-owned company.

Under the terms of the agreement, OneWeb will continue to trade under its existing name and keep its headquarters in the U.K. Eutelsat, which is listed in Paris, plans to pursue an additional listing on the London Stock Exchange.

But the deal will also see the government join a peculiar roster of shareholders in Eutelsat, including the Chinese state. That could raise eyebrows among Britain’s closest allies, not least the U.S.

Eutelsat had already taken a stake in OneWeb last year as part of a post-bailout financing round. Other OneWeb backers include Indian tycoon Sunil Bharti Mittal and Japanese tech investor SoftBank.

Tesla files for 3-for-1 stock split

BlockFi cuts 20% of its staff as bitcoin plunges