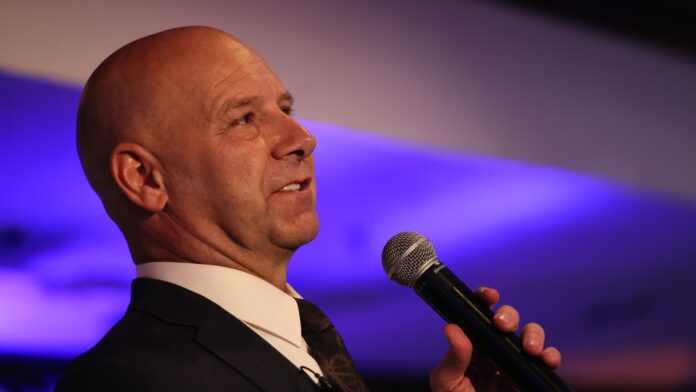 Republican gubernatorial candidate Doug Mastriano gives a victory speech at his election-night party at The Orchards on May 17, 2022 in Chambersburg, Pennsylvania.

Doug Mastriano, the Republican nominee for governor in Pennsylvania, plans to appear Tuesday for a deposition by the select House committee investigating the Jan. 6 Capitol riot — but doesn’t expect to talk for long, his lawyer told CNBC.

Timothy Parlatore, who’s representing Mastriano, said the politician anticipates leaving “in less than 10 minutes” due to an unresolved issue over the terms of his deposition.

Mastriano is not willing to testify unless the panel agrees not to edit video clips of his appearance and release a potentially misleading video afterward, Parlatore said.

Mastriano’s concern is that such a video could affect his chances in Pennsylvania’s upcoming gubernatorial election, where he faces state Attorney General Josh Shapiro, the Democratic nominee, the lawyer said.

“He’s got nothing to hide,”

A spokesman for the committee declined CNBC’s request for comment.

The panel wants to question Mastriano about his efforts to help former President Donald Trump reverse the Republican’s loss in the 2020 campaign to President Joe Biden.

In a letter in February to Mastriano, the committee’s chairman, Rep. Bennie Thompson, D-Miss., wrote, “We understand that you have knowledge of and participated in a plan to arrange for an alternate slate of electors to be presented to the President of the Senate on January 6, 2021, and we understand that you spoke with former President Trump about your post-election activities.”

Parlatore said that his issues with the deposition are “individualized” to Mastriano because of his status as a political candidate in a pending election.

Parlatore believes that neither Mastriano nor any other witness can be compelled to testify in a private session over a technicality. He said the committee lacks a ranking member appointed by the Republican minority in the House.

And while Mastriano is willing to testify behind closed doors, he will not do so unless his conditions are met, Parlatore said. The lawyer said if Mastriano was issued a subpoena to testify at a public hearing, he would be unable to force the panel to comply with conditions before appearing.

House GOP Leader Kevin McCarthy pulled all of his picks from the committee after House Speaker Nancy Pelosi, D-Calif., rejected two of them. Rep. Liz Cheney, R-Wyo., the committee’s top-ranking Republican member, serves as its vice chair, not the ranking member.

Parlatore said that if his expectations for the deposition come to pass on Tuesday, “we’ll be out shortly and then I am going to start drafting a lawsuit.”

Multiple federal judges have reportedly determined that Cheney is effectively the select committee’s ranking member, despite being appointed to the rank of vice chair by the Democrat-led panel.