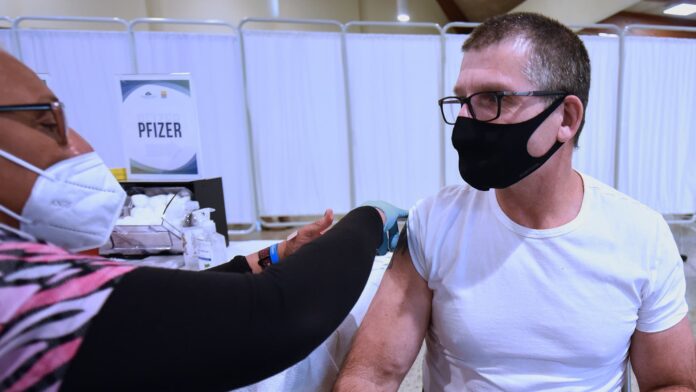 A health worker administers a dose of Pfizer covid-19 vaccine to a man at the Sanford Civic Center. With the emergence of the Omicron covid-19 variant in numerous countries, including the United States, the US Centers for Disease Control (CDC) encouraged all vaccinated adults to receive their Covid-19 booster shot.

People older than 55 who received the new booster had about four times more antibodies targeting omicron BA.5 than people in the same age group who received the old vaccine, according to the companies. Antibodies are a key part of the body’s defense system that block the virus from invading cells.

In addition, people ages 18 to 55 who received the booster had 9.5 times more antibodies targeting omicron BA.5 than they did before receiving the shot. These participants weren’t compared with people of the same age who received the old vaccines.

Pfizer and BioNTech released the first human data in October showing the omicron boosters trigger a better immune response. But two small, independent studies from Columbia and Harvard cast doubt on whether the shots really were a significant improvement. They found the new boosters and the old shots performed about the same against omicron BA.5.

The Food and Drug Administration said the Columbia and Harvard studies were too small to draw any definitive conclusions about the boosters. The scientific community and public health officials are closely following data on the boosters because the FDA authorized them without direct human data.

The FDA relied instead on human data from a similar shot that targeted the original version of omicron, BA.1, as well as animal studies that directly examined the BA.5 shot.

Pfizer and Moderna were originally developing BA.1 shots, but the FDA asked them to switch gears over the summer and develop a booster targeting BA.5 because it had become the dominant variant. As a consequence, there wasn’t enough time for the companies to launch clinical trials and deliver data before FDA authorization.

The FDA was acting with urgency to roll out new shots targeting omicron by the fall, in an effort to head off another surge of infections, hospitalizations and deaths this fall and winter.

The White House, the FDA and the Centers for Disease Control and Prevention have repeatedly said the boosters should provide better protection this fall and winter because they are directly matched to the predominant virus strain for the first time since December 2020.

The monovalent vaccines are no longer providing meaningful protection against infection and mild illness because the virus has evolved so much. They are still generally effective against severe illness and hospitalization, though this protection has also declined over time.