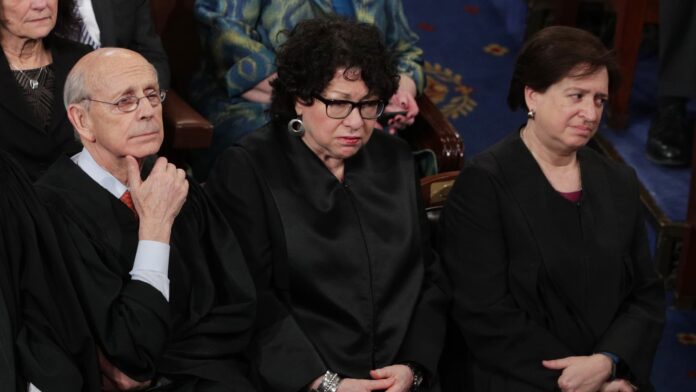 The court overruled a woman’s constitutional right to an abortion, which was established a half-century ago by Roe v. Wade and reaffirmed in the 1992 case Planned Parenthood v. Casey. Friday’s ruling gives individual states the power to set their own abortion laws, with many poised to immediately outlaw or severely restrict the procedure in nearly all instances.

“The majority has overruled Roe and Casey for one and only one reason: because it has always despised them, and now it has the votes to discard them,” wrote Justices Stephen Breyer, Sonia Sotomayor and Elena Kagan in a joint dissent.

“The majority thereby substitutes a rule by judges for the rule of law,” they wrote.

The decision to uphold a restrictive abortion law in Mississippi, the dispute at the center of the case, divided the justices along ideological lines between the six conservative justices and the three liberals in the minority. Chief Justice John Roberts, however, wrote that he did not approve of tossing out Roe altogether.

The majority opinion, authored by Justice Samuel Alito, held that “the Constitution makes no reference to abortion, and no such right is implicitly protected by any constitutional provision.”

While he acknowledged that the court has interpreted the 14th Amendment to guarantee some rights that are not explicitly spelled out, Alito cited precedent stating that those rights must be deeply rooted in U.S. traditions and “implicit in the concept of ordered liberty.”

Roe “was egregiously wrong from the start,” he wrote, and therefore should not be upheld by the principle of adhering to judicial precedent, known as stare decisis.

The liberal wing of the court, which had shrunk to just one-third of the nine-seat bench after former President Donald Trump appointed three new conservative justices during his one-term presidency, tore into the majority from a variety of angles in a seething 59-page dissent.

“We believe in a Constitution that puts some issues off limits to majority rule. Even in the face of public opposition, we uphold the right of individuals — yes, including women — to make their own choices and chart their own futures. Or at least, we did once,” the liberals wrote.

They decried the court for curtailing women’s rights and empowering states to enact draconian reproductive laws that force women to give birth: “A State can of course impose criminal penalties on abortion providers, including lengthy prison sentences. But some States will not stop there. Perhaps, in the wake of today’s decision, a state law will criminalize the woman’s conduct too, incarcerating or fining her for daring to seek or obtain an abortion.”

They accused the conservative majority of disregarding “stare decisis” in order to throw out the abortion rulings, thereby substituting “a rule by judges for the rule of law.”

“In the end, the majority says, all it must say to override stare decisis is one thing: that it believes Roe and Casey ‘egregiously wrong,'” they wrote in the dissent. “That rule could equally spell the end of any precedent with which a bare majority of the present Court disagrees. “It makes radical change too easy and too fast, based on nothing more than the new views of new judges.”

They also warned that the majority’s reasoning threatens other rights that, until recently, appeared settled, including same-sex marriage and intimacy, and the right to purchase contraception.

Roe and Casey are connected to decisions protecting a slew of other constitutional rights, the dissenters wrote, rejecting assurances from the majority that Friday’s ruling does not undermine other cases.

They cited Justice Clarence Thomas’ concurring opinion, which railed against precedents that rely on the doctrine of so-called substantive due process, to argue that “at least one Justice is planning to use the ticket of today’s decision again and again and again.”

“We cannot understand how anyone can be confident that today’s opinion will be the last of its kind,” the liberals wrote.

And they took a sharp swipe at the contention from Justice Brett Kavanaugh that the Constitution is “neutral” on the question of abortion and that the decision should therefore be left to the states.

“When it comes to rights, the Court does not act ‘neutrally’ when it leaves everything up to the States,” the liberals wrote. “When the Court decimates a right women have held for 50 years, the Court is not being ‘scrupulously neutral.’ It is instead taking sides: against women who wish to exercise the right, and for States (like Mississippi) that want to bar them from doing so.”

Kavanaugh “cannot obscure that point by appropriating the rhetoric of even-handedness,” they added.

“In overruling Roe and Casey, this Court betrays its guiding principles. With sorrow — for this Court, but more, for the many millions of American women who have today lost a fundamental constitutional protection — we dissent,” they wrote.