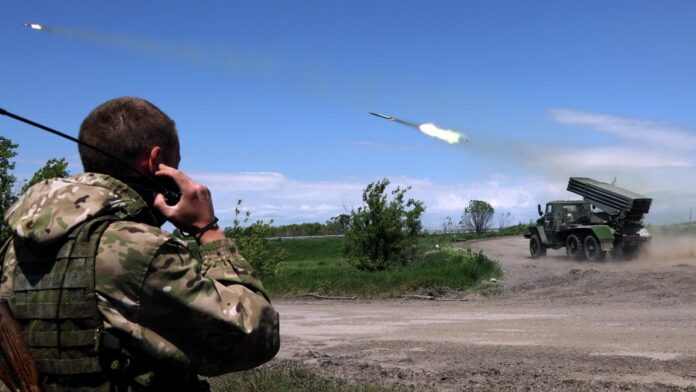 Pro-Russian separatist forces are seen in the Donetsk Oblast in eastern Ukraine on May 28, 2022.

Russia is bringing its reserve forces from all over the country closer to Ukraine to prepare for future advances, according to the U.K.’s Ministry of Defense. Meanwhile, Moscow says it has no plans to withdraw its troops from occupied areas of Ukraine’s south, and that its soldiers will dismantle Ukrainian forces in the whole of the Donbas region.

“Russia is moving reserve forces from across the country and assembling them near Ukraine for future offensive operations,” the U.K. Defence Ministry wrote in a tweet on Saturday.

“A large proportion of the new infantry units are probably deploying with MT-LB armored vehicles taken from long-term storage as their primary transport.”

Russia has long considered its tanks “unsuitable for most front-line infantry transport roles,” the ministry said, suggesting the Russians are facing equipment problems.

“Despite President Putin’s claim on 07 July 2022 that the Russian military has ‘not even started’ its efforts in Ukraine, many of its reinforcements are ad hoc groupings, deploying with obsolete or inappropriate equipment,” it said.

Read more: U.S. to send another $400 million in military aid to Ukraine; Russia hits out at West at G-20

Still, Russian forces continue to pound Ukraine’s eastern Donbas, and on Friday Russia’s ambassador to the U.K., Andrei Kelin, said its troops have no plans to leave the southern coastal areas they have occupied in the last few months. Those include the regions of Kherson, Mykolaiv and Zaporizhzhia, the last of which is home to Europe’s largest nuclear power plant.

Ukrainian forces are meanwhile able to slow down some of Russia’s advances using advanced precision weapons from the West, but they still need more and the troops require more time to learn how to use them, Oleksiy Danilov of the National Security and Defense Council told Reuters in an interview.

The Biden administration is set to announce a security assistance package worth $400 million for Ukraine, according to a senior Defense official, who spoke on the condition of anonymity in order to share new details of the aid package. The official said the latest security assistance will be a mixture of systems already deployed to the fight and new capabilities.

In an example of Russia’s tight control over dissent, a Moscow city councilor was imprisoned Friday with a sentence of seven years for what authorities described as spreading “fake information” on the war in Ukraine.

One lawyer said that this is the first instance of anyone being sent to jail under Russia’s law, established shortly after its invasion of Ukraine began, that criminalized “deliberate dissemination of fake information about Russia’s army.” “Fake information” by Kremlin standards is anything that contradicts the government’s reports.

Moscow city deputy Alexei Gorinov, accused of spreading “knowingly false information” about the Russian army fighting in Ukraine, stands with a poster reading “Do you still need this war?” inside a glass cell during the verdict hearing in his trial at a courthouse in Moscow on July 8, 2022.

“They took away my spring, they took away my summer, and now they’ve taken away seven more years of my life,” Gorinov’s supporters quoted him as saying during his sentencing, Reuters reported.

At the G-20 meeting in Indonesia, several foreign ministers called for an end to Russia’s blockade of Ukrainian ports that is choking vital food exports to much of the world.

Russian Foreign Minister Sergey Lavrov in return accused Western officials at the meeting of “rabid Russophobia” and of focusing on criticizing Moscow rather than on ways to tackle global economic issues.

“There is only rabid Russophobia, which they turn to instead of finding much-needed common ground on key issues on the global economy and finances, for which the G-20 was created,” Lavrov said Friday.

“It is a direct provocation (by Ukraine), aimed at involving the West in military action,” Russian Foreign Minister Sergei Lavrov told a news conference while in Saudi Arabia.

Meanwhile, on Saturday, U.S. Secretary of State Antony Blinken said he spoke to his Chinese counterpart, Foreign Minister Wang Yi, about Russian aggression during several hours of talks in their first in-person discussion since October.

Blinken said he expressed concern over Beijing’s “alignment” with Moscow.

“I shared again with the state councilor that we are concerned about the PRC’s alignment with Russia,” Blinken said, adding that China had “amplified Russian propaganda.”

While China says it opposes bloodshed and wants to see an end to the conflict in Ukraine, its media has largely blamed NATO and the U.S. for the war and has refused to go along with Western sanctions on Russia. Beijing had announced a “no limits” partnership with Moscow just weeks before its invasion of Ukraine.

—CNBC’s Amanda Macias and Reuters contributed to this report.