HomePoliticsRussia’s messages with missiles tell West to back off
Politics

Russia’s messages with missiles tell West to back off 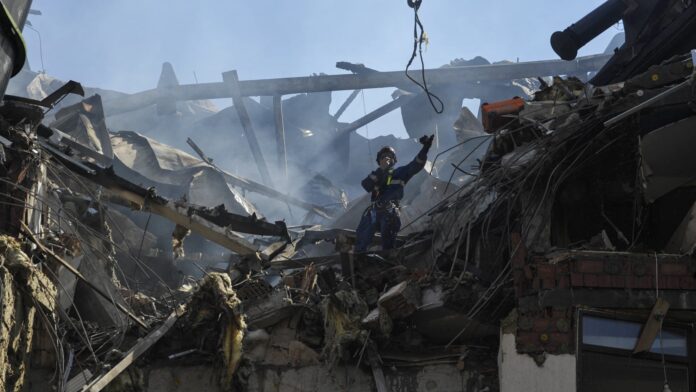 The latest in a litany of horrors in Ukraine came this week as Russian firepower rained down on civilians in a busy shopping mall far from the front lines of a war in its fifth month.

The timing was not likely a coincidence.

While much of the attritional war in Ukraine’s east is hidden from sight, the brutality of Russian missile strikes on a mall in the central city of Kremenchuk and on residential buildings in the capital, Kyiv, unfolded in full view of the world and especially of Western leaders gathered for a trio of summits in Europe.

Rescuers work on a damaged residential building in Kyiv. Rockets hit a house and a kindergarten last Friday, leaving six people injured and one dead.

Were the attacks a message from Russian President Vladimir Putin as the West sought to arm Ukraine with more effective weapons to bolster its resistance, and to set Ukraine on the path to joining the European Union?

Kyiv Mayor Vitali Klitschko suggested as much when missiles struck the capital on June 26, three days after EU leaders unanimously agreed to make Ukraine a candidate for membership.

It was “maybe a symbolic attack” as the Group of Seven leading economic powers and then NATO leaders prepared to meet and apply further pressure on Moscow, he said. At least six people were killed in the Kyiv strike, which pummeled an apartment building.

The former commanding general of U.S. Army forces in Europe, retired Lt. Gen. Ben Hodges, went further in connecting the attack and the meetings. “The Russians are humiliating the leaders of the West,” he said.

A day after the Kyiv attack, as G-7 leaders met in Germany to discuss further support for Ukraine during their annual summit, Russia fired missiles at a crowded shopping mall in the central Ukrainian city of Kremenchuk, killing at least 19 people.

U.S. President Joe Biden, center, attends a working lunch with other G7 leaders to discuss shaping the global economy. The Group of Seven leading economic powers are meeting in Germany for their three-day annual gathering.

The timing of both attacks appeared to be juxtaposed with the European meetings of U.S. President Joe Biden, British Prime Minister Boris Johnson, German Chancellor Olaf Scholz and French President Emmanuel Macron, all supporters of Ukraine.

Defying the evidence, Putin and his officials deny that Russia hit residential areas. Putin has denied that Russian forces targeted the Kremenchuk mall, saying it was directed at a nearby weapons depot. But Ukrainian officials and witnesses said a missile directly hit the mall.

It was hardly the first time that bursts of violence were widely seen as signals of Moscow’s displeasure. In late April, Russian missiles struck Kyiv barely an hour after Ukrainian President Volodymyr Zelenskyy held a news conference with visiting U.N. Secretary-General Antonio Guterres.

“This says a lot about Russia’s true attitude toward global institutions,” Zelenskyy said at the time. Kyiv’s mayor called the attack Putin’s way of giving the “middle finger.”

The Russian president recently warned that Moscow would strike targets it had so far spared if the West supplied Ukraine with weapons that could reach Russia. If Kyiv gets long-range rockets, Russia will “draw appropriate conclusions and use our means of destruction, which we have plenty of,” Putin said.

On Friday, a day after Russian forces made a high-profile retreat from Snake Island near the Black Sea port city of Odesa following what Ukraine called a barrage of artillery and missile strikes, Russia bombarded residential areas in a coastal town near Odesa and killed at least 21 people, including two children.

While Russia’s messaging can be blunt and devastating, Ukraine’s signals under Zelenskyy have focused daily on seeking to amplify Moscow’s cruelty to a world that day by day risks becoming weary of the war.

If interest fades, the concerted support seen at global summits could fade, too. and with it the urgency to deliver the heavier weapons that Ukraine craves.

Zelenskyy tends to pair pleas for more help with reminders that all of Europe ultimately is at stake.

He described the mall attack as “one of the most daring terrorist attacks in European history.”

For all of Ukraine’s indisputable suffering, it was a bold statement of some hyperbole in the context of extremist attacks with mass deaths in Paris, Nice, Brussels, Madrid and London in this century alone.

For Zelenskyy and Ukraine, the underlying demand cannot be reiterated enough: provide more heavy weapons, and faster, before Russia perhaps makes irreversible gains in the eastern industrial region of the Donbas, where street-by-street fighting grinds on.

In his nightly public addresses, Zelenskyy also makes sure to capture the traumatic toll on everyday life in Ukraine, appealing well beyond global leaders to the wider world.

This week, he accused Russia of sabotaging “people’s attempts to live a normal life.”

Images of the shopping mall’s smoking debris said the rest.

This emerging market fund invests in countries based on freedom data