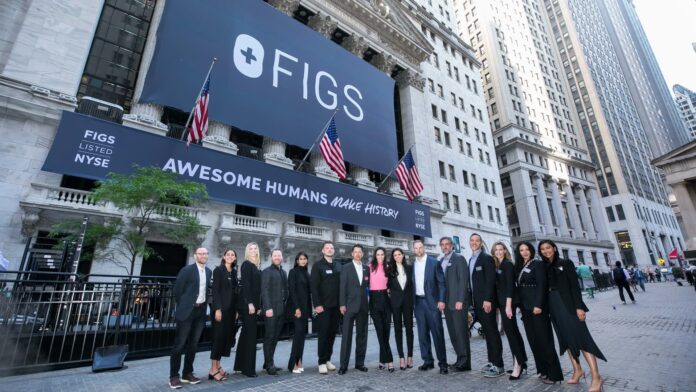 Now’s the time to offload shares of health care apparel brand Figs ahead of a potential slowdown in the U.S., according to Goldman Sachs. The firm downgraded Figs to sell from neutral and slashed its price target on the stock to $7 per share from $14. The new target represents downside of roughly 34%. Even though health care is generally seen as recession-proof, Goldman sees Figs consumers as likely shifting to lower-cost scrubs brands in the event of an economic downturn. “While the brand remains healthy, we believe FIGS is increasingly addressing a higher penetration of its US TAM,” Brooke Roach wrote in a note Wednesday. “Against a tougher macro, we believe FIGS’s core customer is likely to defer purchases or trade-down to alternative brands, reducing top line sales growth opportunity.” Goldman Sachs predicts a 50% chance of recession in the next two years and has started to see signs of deceleration in pockets of the consumer landscape. Generally, the apparel sector tends to underperform during economic downturns, Roach said. “Our surveys indicate consumers plan to reduce apparel spending, and we believe tailwinds from closet restocking are likely to begin to normalize,” Roach wrote. “We lower our estimates to account for a likely top line and merchandise margin deceleration while also embedding FX headwinds, a mild US economic slowdown, a tougher backdrop in Europe, slower growth in ecommerce, and a more promotional landscape.” Goldman also downgraded shares of PVH Corp. — the company that owns brands such as Tommy Hilfiger, Calvin Klein and Warner’s — to neutral from buy, cutting its price target on the stock to $59 per share from $95. “While we continue to see long-term opportunity for PVH to execute its strategic transformation and tailwinds from tourism, we are incrementally more guarded on near-term profitability against a weaker underlying European macro backdrop and rising FX headwinds,” said Roach. —CNBC’s Michael Bloom contributed reporting.

Ukraine says it’s not to blame for Poland missile strike