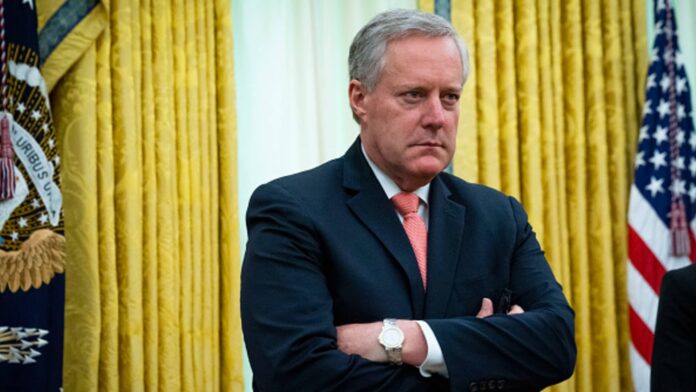 South Carolina’s Supreme Court on Monday agreed to hear an appeal by former Trump White House chief of staff Mark Meadows to block a Georgia grand jury subpoena demanding his testimony in a probe of possible criminal interference in the 2020 presidential election.

The Supreme Court’s action came days after Meadows’ lawyer asked it to take the case, and almost a month after a South Carolina judge ordered Meadows to comply with the subpoena from the Fulton County, Georgia, grand jury.

As of now, Meadows is scheduled to testify in an Atlanta courthouse before that panel on Nov. 30. But that might not happen given the South Carolina Supreme Court’s action.

The grand jury is investigating efforts by former President Donald Trump and his allies to convince Georgia election officials to reverse his 2020 loss in the state to President Joe Biden.

Meadows, a former North Carolina congressman, listened in on a Jan. 2, 2021, call between Trump and Georgia Secretary of State Brad Raffensperger, during which Trump pressured Raffensperger to “find enough votes” to reverse Biden’s win. The call occurred four days before a joint session of Congress began meeting to certify Biden’s victory in the Electoral College.

Georgia authorities had to ask a South Carolina judge to compel Meadows’ compliance with the subpoena because he lives in South Carolina and not Georgia.

A spokesman for the Fulton County District Attorney’s Office, which is presenting evidence to the grand jury, had no immediate comment on the Supreme Court’s action.

Meadows’ attorney James Bannister, who did not return a request for comment, argued in his application to the Supreme Court that the subpoena should be blocked because it violated his client’s constitutional right to privacy. Bannister also argued that the subpoena “incorrectly holds that Mr. Meadows is a material witness to the Fulton County investigation.”

Meadows also is protected from being compelled to travel out of state to testify under South Carolina law, Bannister wrote.

The lawyer also argued that the special purpose grand jury cannot be considered a “true” grand jury under state law because it does not issue indictments or conduct procedures in secrecy.