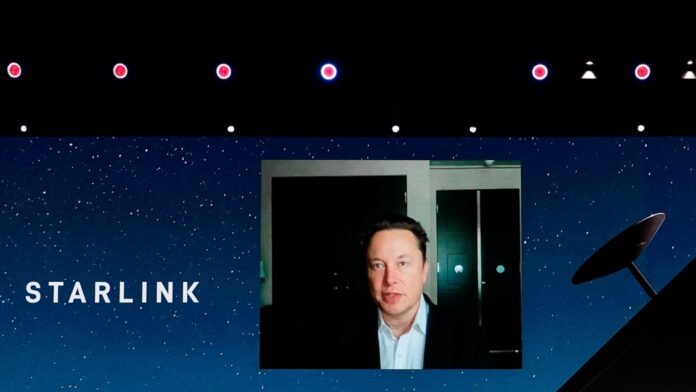 SpaceX CEO Elon Musk speaking about the Starlink project at MWC hybrid Keynote during the second day of Mobile World Congress on June 29, 2021 in Barcelona, Spain.

WASHINGTON – Elon Musk’s SpaceX on Tuesday ramped up a battle over broadband regulations with Dish Network and an affiliate of billionaire Michael Dell, calling for the Federal Communications Commission to address lingering disputes over broadband use that could interfere with its Starlink satellite internet network.

At the heart of the dispute is use of the 12 gigahertz band, a range of frequency used for broadband communications, and the frequency’s ability to support both ground-based and space-based services.

In January 2021, the FCC issued a notice asking for comment on how to best utilize the 12 gigahertz band. Dish and RS Access, funded by Dell’s investment firm, published studies arguing that ground-based 5G networks could share the frequency with low Earth orbit satellite networks, such as Starlink or OneWeb.

SpaceX filed its own analysis of the Dish and RS Access studies on Tuesday, claiming to correct what it called “some of the most egregious assumptions” in the reports and arguing Starlink users would see interference to the point of causing service outages for customers “74% of the time.”

Musk’s company called on the FCC “to investigate whether DISH and RS Access filed intentionally misleading reports,” noting that the studies did not match findings from Dish two years earlier that called sharing usage “not viable.” In response, a Dish spokesperson told CNBC that the company’s “expert engineers are evaluating SpaceX’s claims in the filing.”

SpaceX isn’t alone in opposing a potential expansion of 12 gigahertz use. Telecom companies, such as AT&T, tech giants Google and Microsoft, as well as satellite network operators such as Intelsat, OneWeb, and SES all filed comments with the FCC opposing the change.

Senior SpaceX representatives told CNBC the company hopes its response will prompt the FCC to come to a conclusion on the 12 gigahertz issue, describing the possibility of a decision in favor of Dish and RS Access as an unlikely, but existential, threat to the company’s Starlink network.

“Leaving the proceeding open any longer simply cannot be justified for policy or technical reasons. Over the six years the Commission has let this proceeding fester, satellite operators have been forced to spend countless hours of engineering time responding to frivolous arguments by DISH and RS Access,” SpaceX senior director of satellite policy David Goldman wrote in a letter to the FCC on Tuesday.

SpaceX has launched about 2,700 Starlink satellites into orbit to date, with nearly 500,000 users and its manufacturing line producing about 30,000 satellite dishes per week.

The FCC declined CNBC’s request for comment on when it expects to issue a decision on the 12 gigahertz band.

Dish and RS Access lead a coalition of companies who hold terrestrial FCC licenses in the 12 gigahertz band, with the pair of entities representing the two largest holders in that spectrum range. While Dish is most commonly known for providing satellite television services, the company has acquired broad swaths of spectrum.

For years, Dish has contended that it would make use of its valuable spectrum rights. Recently, with an FCC deadline looming, Dish rolled out its “Project Genesis” network of 5G service, which the company says fulfilled a government requirement to offer service to over 20% of the U.S. population. Whether Dish’s network actually achieves that threshold is disputed, according to The Verge’s testing of the service.

“DISH has never lived up to its repeated promises to deploy a new terrestrial network using the exclusive licenses already stored up in its warehouses—the Commission simply cannot gift more spectrum to any operator with this track record of broken promises and stranded consumers,” Goldman wrote in SpaceX’s letter to the FCC.

Dish did not immediately comment on the Project Genesis network in response to CNBC.

Dish has faced FCC repercussions over spectrum rights before. In an unrelated ruling by the U.S. Court of Appeals on Tuesday, a federal judge upheld an FCC determination that Dish held “de facto control” over two other companies, Bloomberg reported. The arrangement violated spectrum auction rules by acquiring $3.3 billion in bidding credits that were intended for small businesses, according to the report.