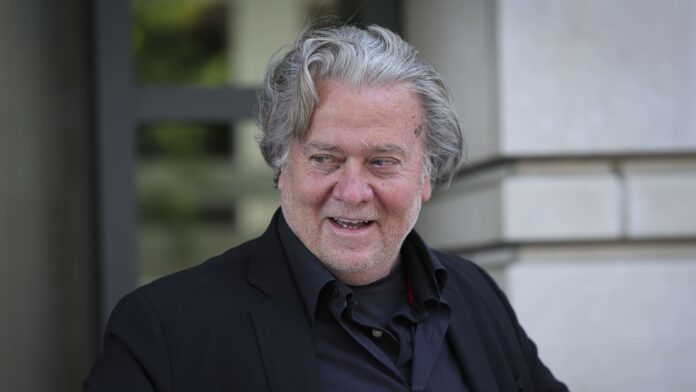 WASHINGTON – One week ahead of jury selection in Steve Bannon‘s contempt of Congress trial, the Justice Department said the Trump associate’s purported desire to reverse his stance and testify before the House Jan. 6 committee is nothing more than a “last-ditch attempt to avoid accountability.”

Bannon, citing a letter over the weekend from former President Donald Trump, said through a lawyer that he would be willing to testify before the House committee investigating the Jan. 6 attack. Bannon spent months blowing off the committee, claiming that Trump was asserting executive privilege despite the fact that Bannon only worked at the White House for seven months back in 2017, three years before the Jan. 6 attack.

The Justice Department sought to prevent Bannon and his lawyers from telling a jury that he was now willing to testify.

“The defendant’s last minute efforts to testify, almost nine months after his default — he has still made no effort to produce records — are irrelevant to whether he willfully refused to comply in October 2021 with the select committee’s subpoena,” the Justice Department argued. “Any evidence or argument relating to his eleventh-hour efforts should, therefore, be excluded at trial.”

“The defendant’s purported desire to testify now does not erase his past contempt,” the DOJ filing added.

The Justice Department said that Bannon’s “continued failure to comply with the subpoena’s document demand while claiming he now will testify suggests his actions are little more than an attempt to change the optics of his contempt on the eve of trial, not an actual effort at compliance.”

Bannon, who was due in court on Monday at 10 a.m. for pretrial arguments, did not immediately return NBC News’ request for comment on the DOJ filing. His legal team is seeking to delay his trial until October.