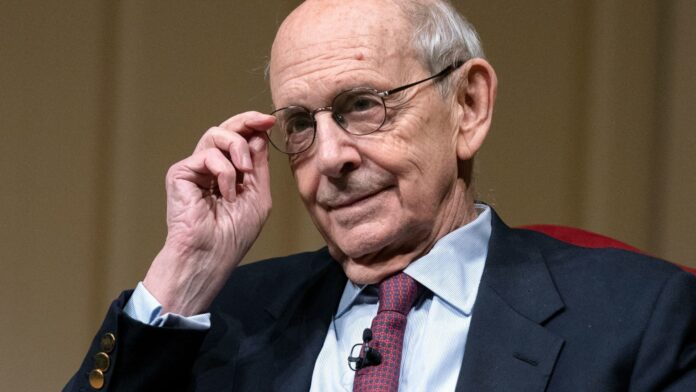 Supreme Court Justice Stephen Breyer told President Joe Biden that he will officially retire at noon Thursday, hours after the court is set to release the last two rulings of its current term.

Breyer’s letter to Biden was expected, as the 83-year-old justice said in January that he would leave at the end of its term. It was only Wednesday morning that the court said that Thursday would be the last day for opinions to be released.

He will be replaced by Ketanji Brown Jackson, 51, who currently is a judge on the U.S. Court of Appeals for the District of Columbia Circuit. Her nomination to the Supreme Court as the first Black woman to serve as a justice was confirmed by the Senate in April.

It was not immediately clear when Jackson would be sworn in as a justice.

“It has been my great honor to participate as a judge in the effort to maintain our Constitution and the Rule of Law,” Breyer told Biden in the letter dated Wednesday.

Judge Ketanji Brown Jackson smiles as Vice President Kamala Harris speaks at an event celebrating her confirmation to the U.S. Supreme Court on the South Lawn of the White House on April 8, 2022 in Washington, DC.

Breyer, who is one of just three liberal justices on the nine-member Supreme Court, has served there since 1994, after being nominated by President Bill Clinton. Jackson is expected to vote with the court’s other liberals, Elena Kagan and Sonia Sotomayor, more often than she is with the court’s six conservatives.

Breyer’s departure will come six days after the Supreme Court, in a major ruling, overturned its 1973 decision in the case Roe v. Wade, which established that there was a federal right to abortion.

He joined the court’s two other liberals in a scathing dissent to Friday’s decision, which gives individual states wide leeway in banning abortion outright, severely limiting termination of pregnancies or making abortion legal.

Also last week, Breyer wrote a pointed dissent to a ruling by the court’s supermajority of six justices, which struck down a New York state law requiring applicants for a license to carry a gun outside of their homes to have a “proper cause” to do so, saying it violated the Second Amendment of the U.S. Constitution.

“Many States have tried to address some of the dangers of gun violence just described by passing laws that limit, in various ways, who may purchase, carry, or use firearms of different kinds,” Breyer wrote. “The Court today severely burdens States’ efforts to do so.”

Grab pares losses by 24%, deliveries unit breaks even ahead of target

Meta plans to lose even more money building the metaverse