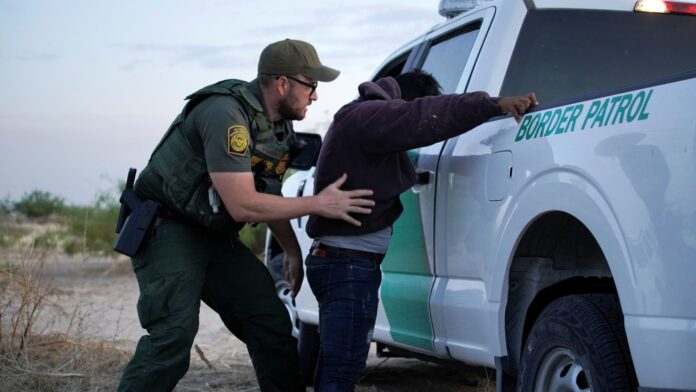 A Border Patrol agent searches a migrant who crossed the U.S.- Mexico border at Mt. Cristo Rey, in Sunland Park, New Mexico, May 23, 2022.

A divided Supreme Court on Thursday refused to block a lower court ruling that prevents the Biden administration from setting new enforcement priorities for immigrants entering the U.S. or living here illegally.

Instead, the court said it would take up the issue in early December.

Justices Sonia Sotomayor, Elena Kagan, Amy Coney Barrett and Ketanji Brown Jackson would have granted the administration’s request to begin carrying out its revised enforcement priorities, according to a brief order.

It was Jackson’s first vote in a Supreme Court case.

The court denied an emergency request from the Justice Department to put a hold on a ruling issued by a federal judge in Texas, which had stopped the Department of Homeland Security from focusing its enforcement efforts on undocumented immigrants considered to pose the greatest threat.

A similar directive setting enforcement policy was in effect during the Obama administration, but it was replaced by a more aggressive approach during the Trump administration, which took the position that a broad range of people here illegally should be deported. Under President Joe Biden, DHS sought to restore the earlier priorities.

Homeland Secretary Alejandro Mayorkas issued the revised guidance last September. “The fact an individual is a removable noncitizen will not alone be the basis of an enforcement action against them. The department’s personnel are to use their discretion and focus the department’s enforcement resources in a more targeted way,” his directive said.

Texas and Louisiana sued to block the revised policy. They said it required border states to shoulder a greater enforcement burden and would put a financial strain on state social service budgets.

The states also said the policy would not require the detention of the worst offenders, including those convicted of crimes of moral turpitude, drug offenders, or human traffickers. Instead, the policy directed that they be subjected to the same “totality of the facts and circumstances analysis” as other undocumented immigrants, lawyers for the states said.

U.S. District Court Judge Drew Tipton ruled for the states, imposing a nationwide injunction forbidding the government to enforce the Mayorkas policy. The U.S. Court of Appeals for the Fifth Circuit, based in New Orleans, allowed Tipton’s order to remain intact, so the Biden administration sought a stay from the Supreme Court.

The order is “disrupting DHS’s efforts to focus its limited resources on the noncitizens who pose the gravest threat to national security, public safety, and the integrity of our nation’s borders,” said Solicitor General Elizabeth Prelogar in asking for an emergency stay.

The U.S. Court of Appeals for the Sixth Circuit, based in Cincinnati, rejected a similar challenge to the policy brought by Arizona, Montana and Ohio. Writing for the majority, Judge Jeffrey Sutton said federal law “gives the national government considerable authority over immigration policy.”

Prelogar also said the Texas judge wrongly blocked the policy throughout the nation. For most of our history, she said, a suit like this would have been unheard of. “Courts did not allow states to sue the federal government based on the indirect, downstream effects of federal policies. And district judges did not purport to enter nationwide relief.”

Nationwide injunctions have long been a Justice Department concern. Prelogar noted that California filed 122 lawsuits against the Trump administration, and Texas has already filed 27 against Biden policy measures.

Court battles over immigration enforcement policies are frequent, partly because Congress has never provided enough resources to detain everyone who enters the US illegally. The issue arose during the just-ended Supreme Court term, in a challenge to Biden’s effort to end the Trump “Remain in Mexico” policy. In that case, the court said the administration could take further steps to shut the program down.

A West Coast port worker union is fighting robots. The stakes are high