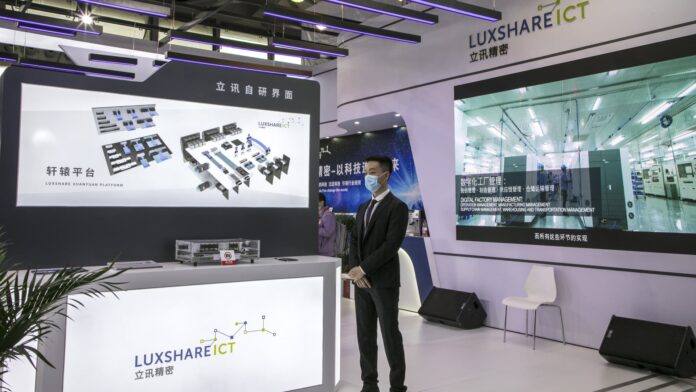 Taiwanese prosecutors on Friday accused a Chinese Apple supplier of stealing commercial secrets from a Taiwanese supplier and poaching its workforce to win orders from the U.S. company, saying it had charged 14 people.

Taiwan has been stepping up efforts to stop what it views as underhand and illegal activities by Chinese firms to steal know-how and poach away talent in what Taipei’s government views as a threat to the island’s tech prowess.

Prosecutors in New Taipei said after a year-and-a-half investigation they had found that China’s Luxshare Precision Industry had targeted Taiwanese competitor Catcher Technology “in order to quickly enter the Apple production chain to win orders”.

Luxshare “lured” Catcher’s China-based research and development team with promises of high salaries and stole business secrets from the Taiwanese firm, causing them big losses, the prosecutors said in a statement.

Luxshare was doing this in order to be able to “quickly build factories and mass produce cases for iPhones, iPads and other products”, the statement said.

Luxshare did not immediately respond to a request for comment, and neither did Apple.

New Taipei prosecutors have now charged 14 people in connection with the case for breach of trust and taking commercial secrets for use overseas, they added.

“The department will do its best to investigate such cases to maintain the sound development of our country’s enterprises and ensure the competitiveness of national industries.”

Catcher, which makes iPhone and iPad cases, said in a statement it continues to implement and optimize the protection of trade secrets and intellectual property rights and will investigate anything that infringes on its rights and interests.

The company is cooperating with the probe, it added.

In May, Taiwanese authorities raided 10 companies or their R&D centers operating in Taiwan without approval suspected of illegally poaching chip engineers and other tech talents.