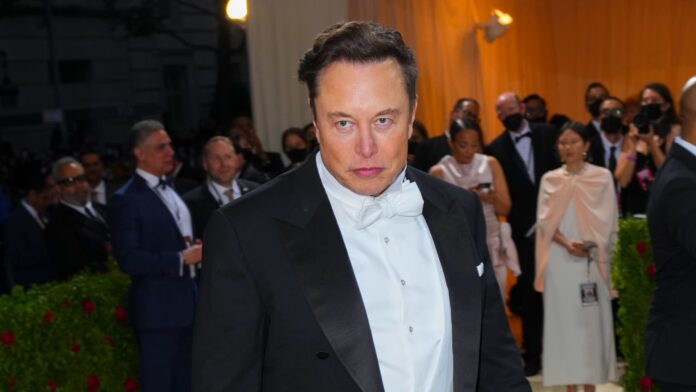 Elon Musk attends The 2022 Met Gala Celebrating “In America: An Anthology of Fashion” at The Metropolitan Museum of Art on May 2, 2022 in New York City. (Photo by Gotham/Getty Images)

Since Tesla CEO Elon Musk announced his bid to buy social network Twitter, shares in his electric vehicle maker have dipped by more than 35%, and closed down just 3.6% for the day on Friday, amid a market rally that followed a volatile week.

Musk first announced he had agreed to buy Twitter on April 25, 2022. Tesla shares closed that day at $332.67, and closed today at $207.47 capping his first full week of Twitter ownership.

Musk spoke at the 29th annual Baron Investment Conference on Friday, where hedge fund investor Ron Baron — who is now a Tesla, SpaceX and Twitter shareholder, and who is generally bullish on Musk’s businesses — asked the centi-billionaire CEO about juggling new responsibilities.

In addition to running a re-usable rocket maker and satellite internet company (SpaceX), and a multinational electric vehicle and sustainable energy company (Tesla), as well as funding and founding a brain-chip company (Neuralink) and tunneling business (The Boring Company), Musk now calls himself “Chief Twit.” More formally, he is the CEO and sole director of Twitter after his $44 billion deal.

Musk told Baron, “My workload went up from about, I don’t know 78 hours a week to probably 120,” adding that, “once Twitter is set on the right path, I think it is a much easier thing to manage than SpaceX or Tesla.”

He has not said who, if anyone, may replace him as Twitter CEO, although he has told followers on Twitter that his position as sole director and CEO of the social network is temporary.

Musk’s ownership of the social network has caused some automakers, including GM and Audi, to pause ad spending there. But it’s not clear how it will impact Tesla in the long run.

Tesla has long relied on Twitter, and Elon Musk’s massive following there, to disseminate information to shareholders, and Musk uses it to promote all of his companies, their products and his own self-image for free. He frequently rallies fans to join him in attacking perceived enemies, such as elected officials, regulators like the Securities and Exchange Commission, reporters and automotive safety advocates who are seen as too critical of Tesla.

To manage Twitter, Musk has authorized more than 50 of his Tesla employees, mostly Autopilot and other software engineers, along with several other trusted advisors and backers from his other businesses. He has not yet explained how Tesla employees’ schedules will be split, how their responsibilities to Twitter and Tesla are paid for or correlated.

At the investor conference, Musk also reiterated that Tesla still intends to develop an electric car that’s less expensive than it’s entry Model 3 electric sedan. He also re-stated a goal of being able to produce 40,000 cars per day.

Musk also said, given how many batteries this level of production would require, and all the metals and other materials that are required to build them, it seems more and more likely Tesla will need to be directly involved in mining, rather than relying completely on outside suppliers.

Baron asked him if Tesla had been talking with or considering an investment in Glencore, as some news outlets had previously reported. Musk said, “We’ve never contemplated investing in Glencore,” and emphasized when it comes to lithium mining, “I’m talking about Tesla, doing it ourselves.”

Twitter plans shareholder vote by August on sale to Musk

What is Strep A, scarlet fever, the disease infecting UK children?