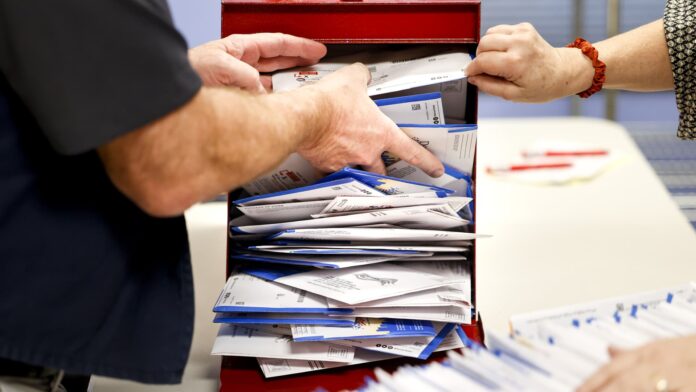 Traders work on the floor of the New York Stock Exchange during morning trading on November 02, 2022 in New York City.

During every election season, candidates from both sides of the aisle are fond of suggesting that a win by their opponent will produce economic Armageddon and tank the stock market. And time and again, it never quite turns out that way, regardless of the outcome.

To be sure, markets and investors care about elections – just not as much as many think. Still, it’s interesting that stocks have typically done well in the aftermath of midterm elections. In the 12 months after October 31 during each midterm year since 1962, the S&P 500 has jumped by an average of 16.3%, according to U.S. Bancorp Investments data.

Surely, some these gains are an anomaly. After all, there is a long list of things that markets care far more about than who wins an election, including the health of the economy, corporate earnings, equity valuations and interest-rate policy.

Will we see a bounce over the next year, like after past elections? Over the short term, it seems possible, if not likely. Looking further down the road? That’s when things could get dicey.

To be sure, businesses and investors have policy preferences, with most preferring lower taxes and fewer regulations. But they also crave certainty.

Notably, it’s hard to make the case that markets were cheering a particular outcome. Indeed, they rose when Republicans did well in 2014 and 2016, and then once again when Democrats took control of the White House and Senate in 2020.

Instead, what those elections produced was clarity. When businesses and investors know the result of an election – even if they may not like it – they can plan and articulate a vision, and markets tend to respond favorably, at least in the short term.

One argument for why stock gains could be more than just transitory is that this election is unlikely to produce a unified government. Most models predict Republicans will take control of at least one chamber of Congress, with the analytics site FiveThirtyEight.com giving them about a 70% chance to win the House. (The site is far less bullish on the GOP’s chances to win the Senate).

Such an outcome would make it unlikely that meaningful legislation gets passed over the next two years. While this sort of political gridlock is why many Americans abhor politics, investors prefer when lawmakers get out of the way and let the markets do their thing.

That could be especially relevant after this cycle. For all the talk of how England’s now-revised fiscal plans would have stoked more inflation, further government spending in the U.S. could do the same. Therefore, if divided government results in fewer spending bills getting passed, that could be a good thing.

Still, persistently high inflation – not just here but across the globe – is a huge reason to believe stocks will buck the above trends and struggle in the months after the election concludes and beyond. Fed Chairman Jerome Powell has been steadfast: Policymakers will do whatever it takes to quell rising prices, even if it means “some pain” for families and businesses.

This stance is likely the result of lessons learned from the 1970s when inflation also ran hot. At the time, the Fed under Arthur Burn’s leadership took its foot off the gas prematurely, which only complicated matters. It took massive rate increases by Paul Volcker – and two deep recessions – to cure the problem.

Powell, no doubt, is trying to avoid a repeat of that. So, expect policymakers to err on the side of tightening policy too aggressively and for too long.

Whether all of this means a recession is imminent is anyone’s guess, though a consensus is forming among economists that that’s exactly what will happen. And while contractions can be short and shallow, any economic slowdown combined with high interest rates makes betting on a surging market over the next 12 months a risky proposition.

There’s a saying that has become vogue in political circles in recent years: Elections have consequences. They certainly do, impacting everything from the makeup of the Supreme Court to the heads of powerful Congressional committees and regulatory agencies like the Securities Exchange Commission.

But their impact on the markets? The repercussions are not nearly as dramatic, despite what some partisans would have you believe. Other variables matter much more. We’ll likely see that play out in the coming months.

What AMD’s warning means for the other chip stocks, according to Bank of America