HomeUSAThis is what college really costs and how much you should save...
USA 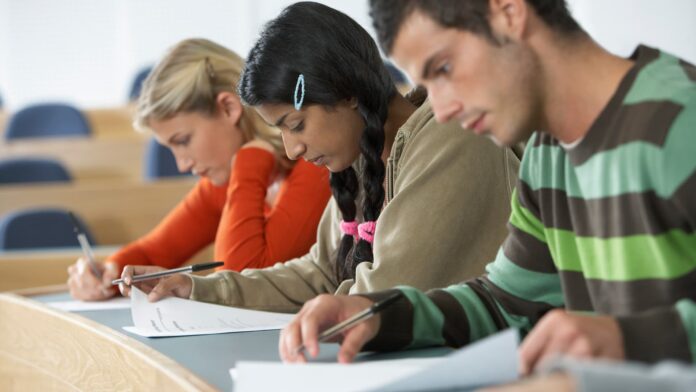 For most families looking at colleges, the price tag seems overwhelming. But things aren’t always what they seem.

That’s because about 66% of all full-time students receive aid, which can lower the cost significantly.

For example, tuition and fees plus room and board at highly selective four-year colleges averages more than $74,000 per year. However, the price families actually pay is closer to $27,000, on average, according to new research by Vanguard.

At public, in-state schools, the net price that an average student pays is actually $14,360 a year — well below the average sticker price of $26,364, Vanguard found.

More from Personal Finance:
How to pay for college after a financial setback
What new graduates need to know about money and jobs
These degrees from public colleges pay more than $100,000

“When parents are anchored to these published tuition costs, it can really be discouraging,” said Jonathan Kahler, a certified financial planner and author of the report. “These high prices seem impossible.”

In fact, most families pay a great deal less.

It’s not uncommon for the most sought-after schools to list total prices of $80,000 a year or more, Kahler said.

“In reality, the vast majority of students and their families will pay considerably less once financial aid and other discounting is factored in.”

Net price: Your net price is tuition and fees minus grants, scholarships and education tax benefits, according to the College Board.

At some private colleges, the average scholarship award is just over $50,000, The Princeton Review found, which brings the total out-of-pocket cost closer to $20,000.

The Princeton Review even ranked colleges by how much financial aid is awarded and how satisfied students are with their packages.

When it comes to giving out scholarships and grants, it’s often the most expensive private schools that have the most money to spend, both reports found. These are the private and public colleges that are offering the most substantial aid packages.

The U.S. Department of Education awards about $120 billion every year to help students pay for higher education. And beyond federal aid, students could also be eligible for financial assistance from their state or college.

But students must first fill out the Free Application for Federal Student Aid, or FAFSA, which serves as the gateway to all federal money, including loans, work-study and grants. Still, fewer students are applying, and most say it’s because they didn’t think they would qualify, studies show.

Yet families earning up to $275,000 can be eligible for some assistance, Vanguard found.

“Depending on the situation, depending on the school, very high-income families are still qualifying for some financial aid, especially if they had more than one student in school at the same time,” Kahler said.

In total, the high school Class of 2021 left an estimated $3.75 billion in Pell Grants on the table by not completing the FAFSA, according to a report from the National College Attainment Network.

How much you should save for college

Kahler also said the earlier you can get started in a 529 college savings plan, the better off you’ll be. Not only can you get a tax deduction or credit for contributions; earnings grow on a tax-advantaged basis and, when you withdraw the money, it is tax-free if the funds are used for qualified education expenses such as tuition, fees, books, and room and board.

When factoring in inflation and your time horizon, some simple savings targets can help.

“If you are starting when a child is born, if you can save about 3% of income per year, that will generally get you on track,” Kahler said.

However, families starting later “must play catch-up,” he said.

These 10 cars have the greatest potential lifespan