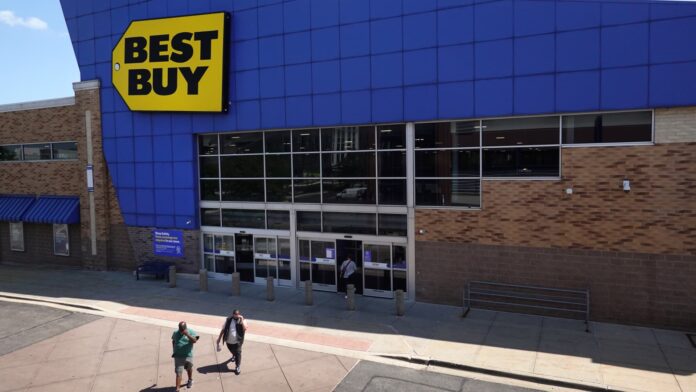 It’s been a short-yet-volatile trading week as investors dealt with low trading volumes due to Thanksgiving and an early market close on Friday. The three indexes were poised to end the week with gains as they climbed on Tuesday and Wednesday. The Dow Jones Industrial Average is up 1.8% this week, while S & P 500 and Nasdaq Composite have added 1.6% and 0.9%, respectively. The biggest winners have posted gains far greater than any of the major indexes. CNBC Pro screened for the stocks with the greatest week-to-date percentage changes, according to FactSet. The data below is current through Friday’s open. The best performer this week was electronics retailer Best Buy , which is up about 14% this week. The stock is down roughly 19% this year. Its performance comes off per-share earnings and revenue beats reported in third-quarter earnings Tuesday. The company also said it expects a smaller drop in comparable store sales, which measures in-store revenue between similar periods, than expected for both the quarter and full year. However, the stock is not without risk. Just 22.2% of analysts recommend buying it , with the average price target showing its share value is expected to drop by around 1.2%. Media giant Disney was also among the best performers. The stock is well liked, with 78.6% of analysts rating it a buy. Its average price target implies an upside of 21.7%. Shares were up more than 7% through Friday’s open. The rally followed the company’s announcement that longtime CEO Bob Iger would come back and replace Bob Chapek . The decision comes amid a tumultuous year for the stock, which has lost more than 35% Like Best Buy, Agilent Technologies was among the best performers on the back of its better-than-expected fourth-quarter earnings reported Monday. The health technology company reported beating expectations for quarterly revenue and per-share earnings while giving a mixed next quarter and full-year outlook. The stock is rated a buy by 61.1% of analysts, whose average price target implies shares should go up about 2.4%. The stock gained more than 6%this week, but is down more than 2% since the start of the year. Shares of discount retailer Ross Stores popped after the company beat expectations for per-share earnings and revenue last week. Through Friday’s open, shares were up more than 8% for the week. On the company’s latest earnings call, executives said Ross expected a “very promotional” holiday season, but its focus on low prices should help the company gain market share given economic challenges making consumers more conscious of how they spend. The rally following Ross’s quarterly results have lifted shares into positive territory for the year. Just over half, or 52.2%, of analysts give it a buy rating, with an average upside of 1.6%.

Tesla stock had its worst week since Mar. 2020 amid wild week for Musk