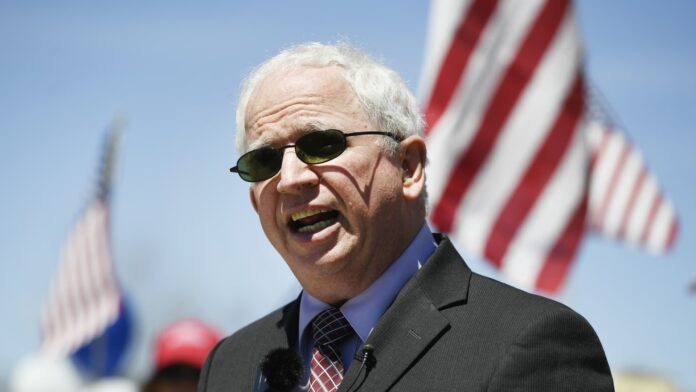 John Eastman, the University of Colorado Boulders visiting scholar of conservative thought and policy, speaks about his plans to sue the university at a news conference outside of CU Boulder on Thursday, April 29, 2021. CU relieved Eastman of his public duties after he spoke at President Donald Trump’s rally preceding the Capitol insurrection on Jan. 6.

In papers filed in federal court in New Mexico, Eastman said he was stopped by federal agents last week in New Mexico, who executed a search warrant and seized his phone. He said that on the evening of June 22, he was stopped by FBI agents while walking to his car after having dinner at a restaurant with his wife and a friend. The agents patted Eastman down, seized his phone and “forced” him to unlock it, he said.

The warrant authorized seizure of “any electronic or digital device—including cell phones, USB devices, iPads, and computers identified in the affidavit—and all information in such devices,” the court filing said. Eastman is seeking his phone’s return.

NBC News has reached out to the Justice Department for comment.

The alleged seizure came the same day federal agents executed a search warrant at the Virginia home of Jeffrey Clark, a former Justice Department official who, like Eastman, has played a prominent role in the Jan. 6 committee hearings this month. “They took all of the electronics from my house,” Clark said on Fox News last week.

Eastman’s suit said the federal agents involved in seizing his phone at first refused to show him the warrant, and when they eventually did, it indicated his phone had been taken on behalf of the Justice Department’s Office of Inspector General.

“After seizing the device(s), law enforcement intends to transport the device(s) to Washington, D.C., or to the DOJ-OIG forensic laboratory in Northern Virginia,” the warrant said, according to Eastman’s filing.

The IG’s website says it is examining “the role and activity of DOJ and its components in preparing for and responding to the events at the U.S. Capitol on January 6, 2021.”

Eastman contends the seizure of his property was “unlawful” because he doesn’t work for DOJ, and the IG is only empowered to “initiate, conduct and supervise” investigations involving people inside the Justice Department.

Legal experts told NBC News that the IG can and does conduct criminal investigations and can follow the evidence wherever it leads. In this case, agents had to convince a federal judge that there was probable cause to believe a crime was committed to get a judge to sign off on the warrant, the experts said.

Clark was a top official at the Justice Department at the time of the Jan. 6 riot. According to testimony last week before the House committee investigating the insurrection, Clark was also an avid supporter of then-President Donald Trump’s election conspiracy theories, and Trump’s choice to serve as acting attorney general in the waning days of his presidency. Trump later backed off of that plan after DOJ leadership threatened to quit en masse if Clark was given the top post.

In a committee hearing earlier this month, Pence’s counsel at the time, Greg Jacob, testified that Eastman had urged the vice president on Jan. 5 to reject electors from contested states in a bid to overturn the election, even after acknowledging the day before that doing so would be illegal.

The congressional hearing also featured an email Eastman sent to Trump lawyer Rudy Giuliani after Jan. 6 that read, “I’ve decided that I should be on the pardon list, if that is still in the works.”

Fed could cut interest rates in 2023, analysts say, after rate hikes this year