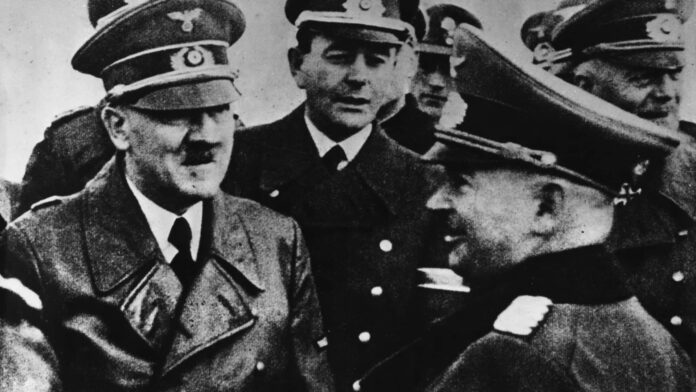 Colonel General Kurt Zeitzler talking to Adolf Hitler, prior to the revolt of Hitler’s generals, circa 1944.

Former President Donald Trump complained to then-White House Chief of Staff John Kelly that American generals were not as loyal to him as he believed German generals had been to Nazi leader Adolph Hitler, according to a new book about Trump’s tenure in office.

“You f—-ing generals, why can’t you be like the German generals?” Trump asked Kelly, a retired Marine Corps general, according to an excerpt published online Monday in The New Yorker of the upcoming book “The Divider: Trump in the White House, 2017-2021.”

“The German generals in World War II,” Trump responded, according to the excerpt of the book, which was written by New York Times White House reporter Peter Baker and New Yorker staff writer Susan Glasser. Doubleday is publishing the book in September.

“You do know that they tried to kill Hitler three times and almost pulled it off?” Kelly said, according to the book excerpt.

Trump then said, “No, no, no, they were totally loyal to him,” according to the excerpt.

Glasser and Baker described how Trump soured on Joint Chiefs of Staff Chairman Gen. Mark Milley, after Milley, then-Attorney General William Barr, and Defense Secretary Mark Esper resisted his demands to have the military respond to protests outside the White House in response to the murder by police officers of George Floyd.

“You are all losers! You are all f—-ing losers!” Trump told them, according to the article.

“Turning to Milley, Trump said, ‘Can’t you just shoot them? Just shoot them in the legs or something?'” Glasser and Baker reported.

Trump, in an emailed statement, said Milley and other generals referenced in the book were “very untalented people and once I realized it, I did not rely on them, I relied on the real generals and admirals within the system.”

Trump’s statement went on to list a series of accomplishments he took responsibility for, including keeping the U.S. “out of wars.”

Milley later deeply regretted joining Trump and the president’s aides in a walk through Lafayette Square, after that area outside the White House was cleared of demonstrators, according to the book excerpt. Trump was photographed holding a bible outside a church nearby.

“It is my belief that you were doing great and irreparable harm to my country,” Milley wrote Trump afterward in a resignation letter he never actually sent, The New Yorker reported.

According to the book excerpt, “General Milley wrote that Mr. Trump did not honor those who had fought against fascism and the Nazis during World War II.”

“It’s now obvious to me that you don’t understand that world order,” Milley wrote in the letter, as reported. “You don’t understand what the war was all about. In fact, you subscribe to many of the principles that we fought against. And I cannot be a party to that.”

Trump while president also reportedly showed distaste for the idea of injured armed services members, including those in wheelchairs and missing limbs, participating in a huge military parade that he wanted in Washington on Independence Day.

“Look, I don’t want any wounded guys in the parade,” Trump told Kelly, whose own son was killed in combat in Afghanistan, according to the article.

“This doesn’t look good for me.”

That parade never came to fruition after retired generals such as his then-Defense Secretary James Mattis and Air Force General Paul Selva, the then-vice chairman of the Joint Chiefs of Staff, strongly resisted the idea, which would have cost millions of dollars and damaged Washington’s streets.

“I’d rather swallow acid,” Mattis said at the time, according to the excerpt.

And when Kelly sarcastically told Trump that Selva was going to organize the parade, the president, not realizing it was a joke, asked Selva what he thought of that plan.

“I didn’t grow up in the United States, I actually grew up in Portugal,” Selva said, according to the excerpt. “Portugal was a dictatorship —and parades were about showing the people who had the guns. And in this country, we don’t do that.”

“It’s what dictators do,” Selva said.

The easing of inflation pressures is giving the economy some breathing room, for now