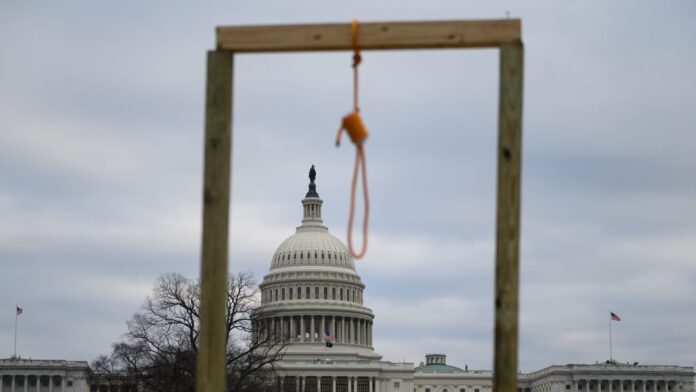 A noose is seen on makeshift gallows as supporters of US President Donald Trump gather on the West side of the US Capitol in Washington DC on January 6, 2021.

When former President Donald Trump heard his supporters chanting “hang Mike Pence” during the Jan. 6 Capitol riot, White House aides said he told them the vice president “deserves” it, according to a former White House aide who testified Tuesday to what she saw and heard during the weeks surrounding the attack.

The jaw-dropping remarks came during the sixth public hearing by the House select committee investigating the Jan. 6, 2021, riot at the U.S. Capitol by a violent pro-Trump mob.

At the White House, Cipollone told Meadows, “The rioters have gotten to the capitol, Mark. We need to go down and see the president now,” Hutchinson testified.

Meadows replied, “He doesn’t want to do anything, Pat,” Hutchinson said.

Cipollone shot back, essentially saying that something must be done or “people are going to die and the blood’s going to be on your effing hands,” Hutchinson said.

Meadows and Cipollone both walked toward the Oval Office dining room. Rep. Jim Jordan, R-Ohio, then called asking for Meadows, Hutchinson testified. She said she went to the dining room to give the phone to Meadows, who took the call with the door ajar. Hutchinson said that in the background, she could hear conversations about the chants of “hang Mike Pence” that had sprung up among some of the rioters.

Hutchinson said she returned to her desk and Meadows and Cipollone appeared minutes later.

“I remember Pat saying something to the effect of, ‘Mark, we need to do something more. They’re literally calling for the vice president to be effing hung,'” Hutchinson testified.

“Mark had responded something to the effect of, ‘You heard him, Pat. He thinks Mike deserves it. He doesn’t think they’re doing anything wrong,'” Hutchinson said.

She told the committee, “I understood ‘they’re’ to be the rioters in the Capitol that were chanting for the vice president to be hung.”