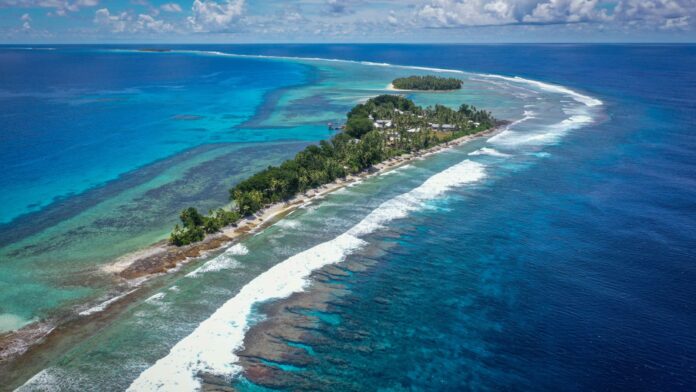 The low-lying country of Tuvalu faces an existential threat from rising sea levels.

SHARM EL-SHEIKH, Egypt — The South Pacific island nation of Tuvalu on Tuesday urged countries at the COP27 climate summit to establish a global treaty to phase out the use of fossil fuels.

The low-lying country, which faces an existential threat from rising sea levels, is the first to make such a call at the U.N.’s flagship climate conference.

“The warming seas are starting to swallow our lands — inch by inch. But the world’s addiction to oil, gas and coal can’t sink our dreams under the waves,” Tuvalu Prime Minister Kausea Natano said in a statement.

“We, therefore, unite with a hundred Nobel Peace Prize laureates and thousands of scientists worldwide and urge world leaders to join the Fossil Fuel Non-Proliferation Treaty to manage a just transition away from fossil fuels.”

Tuvalu follows in the footsteps of its Pacific neighbors in making the call for a fossil fuel non-proliferation treaty. Vanuatu called for the establishment of such a mechanism at the U.N. General Assembly in September.

Only a handful of small countries have endorsed the initiative to date, however, and the fossil fuel industry has typically sought to underline the importance of energy security in the transition to renewables.

The statement Tuesday comes at a time of growing momentum for calls to end fossil fuel production worldwide. The European Parliament, the Vatican and the World Health Organization have all backed the proposal in recent months.

Oil and gas giants, meanwhile, have reported record profits at a time of high energy costs and a cost-of-living crisis.

U.N. Secretary-General Antonio Guterres on Monday called for all governments to tax the “windfall profits” of fossil fuel companies and redirect the money to people struggling with rising food and energy costs and to countries suffering loss and damage caused by the climate crisis.

“Vanuatu and Tuvalu are the first countries to call for a new Treaty as a companion to the Paris Agreement to align oil, gas and coal production with a global carbon budget,” said Tzeporah Berman, chair of the Fossil Fuel Treaty Initiative.

“We will look back on this in history as the moment of reckoning with overproduction that is locking in further emissions and holding us back from bending the curve,” Berman said.

What does the treaty call for?

The fossil fuel non-proliferation treaty seeks to establish a common framework to stop the expansion of any new coal, oil and gas.

To be sure, the burning of fossil fuels is the chief driver of the climate emergency and a flurry of U.N. reports in the run-up to climate talks in Egypt’s resort town of Sharm el-Sheikh warned that urgent and collective action is needed to avert catastrophe.

The treaty also intends to wind down existing production in line with the pursuit to prevent global heating from surpassing the critical threshold of 1.5 degrees Celsius and support a shift to renewables where no community or country is left behind.

“Big ocean states pushed for the 1.5C target, they’ve pushed for loss and damage, and now they’re pushing for a Fossil Fuel Non-Proliferation Treaty. This is the next necessary step in international climate policy for climate justice,” Singh said.

Last year, Tuvalu Foreign Minister Simon Kofe sought to underscore how vulnerable the country is to global heating by delivering his speech to the COP26 conference while standing knee-deep in the ocean.