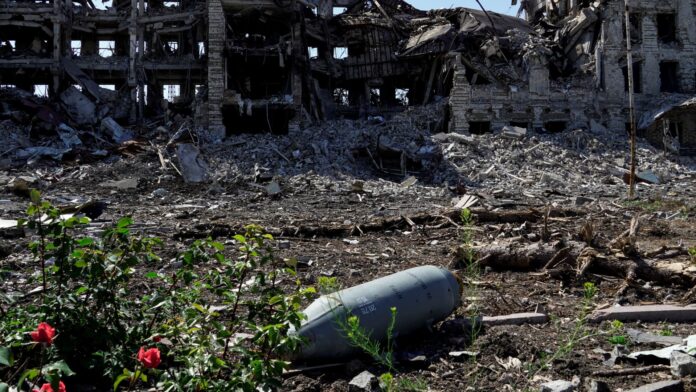 A non exploded aviation bomb FAB-250 is pictured in front of a destroyed building in the city of Mariupol on June 2, 2022, amid the ongoing Russian military action in Ukraine.

The family of a British man condemned to death for fighting for Ukraine said it is devastated by the outcome of what it termed a “show trial” and called Saturday for him to be released and accorded the treatment an international human rights convention guarantees prisoners of war.

A court in the separatist-proclaimed Donetsk People’s Republic of Ukraine convicted two British fighters and one Moroccan on Thursday of seeking the violent overthrow of power, an offense punishable by death in the eastern territory controlled by Moscow-backed rebels.

The men were also convicted of mercenary activities and terrorism.

“Our whole family is devastated and saddened at the outcome of the illegal show trial,” the family of one of the British men, Shaun Pinner, said.

A statement issued by Britain’s Foreign Office on behalf of Pinner’s family said the 48-year-old had been a resident of Ukraine for four years.

“We sincerely hope that all parties will cooperate urgently to ensure the safe release or exchange of Shaun. Our family, including his son and Ukrainian wife, love and miss him so much and our hearts go out to all the families involved in this awful situation,” the statement said.

The family also described Pinner as a proud “contracted serving marine in the 36th Brigade,” a Ukrainian naval infantry division that helped defend the besieged southern port city of Mariupol before it was captured by Russian forces.

As a member of the brigade, Pinner “should be accorded all the rights of a prisoner of war according to the Geneva Convention and including full independent legal representation,” the family said.

Ukraine and the West have denounced the proceedings in the unrecognized Donetsk republic as a sham and a violation of the rules of war.

The pro-Russia separatists said Saturday they were preparing to also try a South Korean citizen who had fought on the side of Ukraine, but that the man had escaped. They said they still wanted to have him tried in South Korea, but it was not clear how that could happen.

Ukraine has called on foreigners to join their resistance to Russia’s invasion, and some have answered that call, though not all have been accepted in Ukraine’s foreign legion.

The Czech Republic’s foreign minister, Jan Lipavsky, said Saturday that a Czech citizen died in the Donetsk region in Ukraine — the first reported Czech fatality among the foreign volunteers.