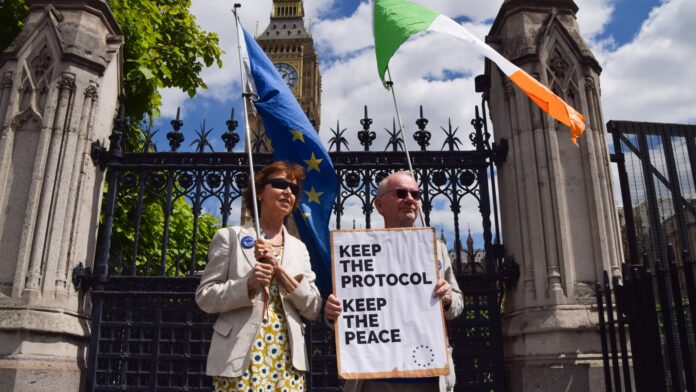 The U.K. government has pushed ahead with plans to unilaterally override parts of the Northern Ireland protocol it agreed with the EU in 2019.

LONDON — The U.K. government has pushed ahead with controversial plans to unilaterally override post-Brexit trade rules, ratcheting up the risk of a trade war as the European Union prepares to take retaliatory legal action.

Prime Minister Boris Johnson’s government on Monday published draft legislation to rewrite the Northern Ireland protocol, part of the post-Brexit trading agreement which requires checks on some goods entering Northern Ireland from the rest of the U.K.

The deal, which came into force in January last year, was designed to avoid the need for a hard border between Northern Ireland and the Republic of Ireland, which remains part of the EU.

Johnson wants to simplify the way goods flow from Britain to Northern Ireland and remove additional costs and paperwork for businesses.

The embattled prime minister has insisted the proposed changes are “relatively trivial” — but he’s heading for a fresh fight over the plan on multiple fronts, including with some of his own Conservative Party.

The EU also firmly opposes the move, saying it breaks international law. The world’s largest trading bloc has said it is considering launching legal action against the U.K. over the proposal.

European Commission Vice-President Maros Sefcovic said it was with “significant concern” that the bloc takes note of the U.K.’s decision to table legislation “disapplying core elements of the Protocol.”

“We will react as one to this breach of trust,” German Foreign Minister Annalena Baerbock said via Twitter, adding that peace and prosperity on the island of Ireland is “not a pawn.”

Protesters holding EU and Ireland flags, and a ‘Keep the Protocol’ placard stand outside Parliament.

Tensions over the protocol have been simmering for months, particularly in the absence of a functioning devolved government in Northern Ireland.

The situation has sent alarm bells ringing across the Atlantic too, with the U.S. urging the U.K. to continue negotiations with the EU to find solutions.

What has been proposed?

In what it described as a “doctrine of necessity,” the U.K. government sought to justify the move by claiming the protocol had caused “peril” to stable social and political conditions in Northern Ireland and threatened the protection of the Good Friday Agreement.

Signed on April 10, 1998, the Good Friday Agreement is a historic truce that brought an end to three decades of sectarian violence in Northern Ireland between Irish separatists and British loyalists.

“So, people in Northern Ireland, particularly in the unionist community, are feeling less connected to Great Britain and that they are not benefitting from being part of the United Kingdom. And that is a problem that we need to deal with,” Truss said.

Truss had previously warned the U.K. would have “no choice but to act” if EU lawmakers do not show the “requisite flexibility” over the protocol.

Somewhat surprisingly, the U.K. appeared to accept that its plans to rip up the previously signed agreement would not meet its obligations under international law.

It said the term “necessity” had been used in the bill to lawfully justify situations where the only way the state can safeguard an essential interest is by breaking another international obligation. The U.K. government said there was “no other way” to safeguard the interests at stake.

At the heart of the U.K.’s plan to ease trade disruption are the so-called green and red channels.

The changes proposed will be debated and voted on in Parliament.

How has the bill been received in Northern Ireland?

“All that Boris Johnson is doing today is to further political instability and to create even more economic uncertainty for the days and weeks ahead,” O’Neill told reporters on Monday.

Democratic Unionist Party leader Jeffrey Donaldson disputes that the move is illegal and has said the party will now watch to see how the bill progresses through parliament before signing up to a new devolved government.

The DUP, which came second behind Sinn Fein in May 5 elections, has refused to re-enter the executive — which runs the devolved government in Northern Ireland — until the protocol is rewritten. The DUP says U.K. lawmakers must abolish the original protocol, arguing that a customs border has been created across the Irish Sea which undermines Northern Ireland’s place within the U.K.

Sinn Fein, which accepts the protocol, has the right to nominate the executive’s first minister after becoming the first nationalist party to win the most seats in the 101-year history of Northern Ireland.

However, under a power-sharing agreement introduced in the 1990s, a new government cannot be formed without the DUP. The first minister and deputy minister must be one unionist and one nationalist.