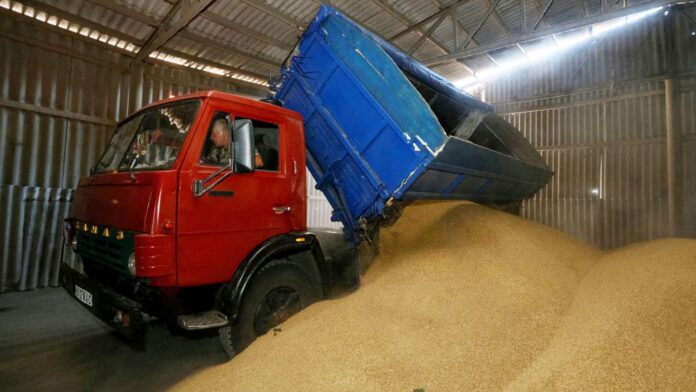 A driver unloads a truck at a grain store during barley harvesting in the village of Zhovtneve, Ukraine, July 14, 2016.

Ukraine has established two routes through Poland and Romania to export grain and avert a global food crisis although bottlenecks have slowed the supply chain, Kyiv’s deputy foreign minister said on Sunday.

Ukraine is the world’s fourth-largest grain exporter and it says there are some 30 million tonnes of grain stored in Ukrainian-held territory which it is trying to export via road, river and rail.

Ukraine was in talks with Baltic states to add a third corridor for food exports, Senik said.

He did not give details on how much grain has already moved or would be moved through these routes.

“Those routes are not perfect because it creates certain bottlenecks, but we are doing our best to develop those routes in the meantime,” he told Reuters on the sidelines of an Asian security summit in Singapore.

The Ukrainian rail system operates on a different gauge from European neighbors such as Poland, so the grain has to be transferred to different trains at the border where there are not many transfer or storage facilities.

Re-routing grain to Romania involves transport by rail to ports on the Danube river and loading cargoes onto barges for sailing towards the port of Constanta, a complex and costly process.

Moscow, which calls the war a special military operation and denies hitting civilian and agricultural targets, blames Western sanctions on Russia and sea mines set by Ukraine for the drop in food exports and rising global prices. It is also a major exporter of grain.

The war in Ukraine dominated proceedings at the Singapore meeting, the Shangri-La Dialogue. Ukrainian President Volodymyr Zelenskyy addressed the delegates via video link on Saturday, telling them their nations’ support was crucial not just to defeat the Russian invasion, but to preserve the rules-based order.