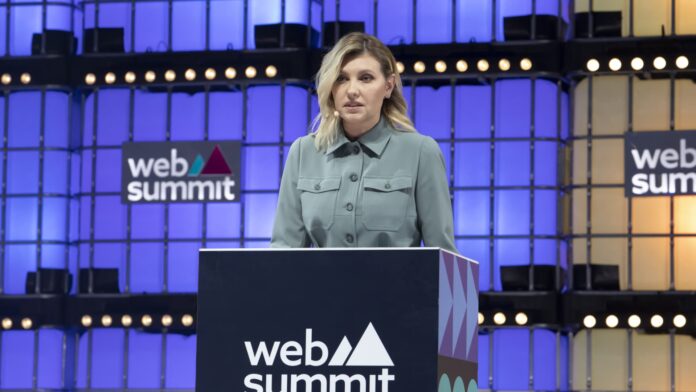 First Lady of Ukraine Olena Zelenska during at opening night of Web Summit 2022 in Lisbon, Portugal on November 1, 2022.

Ukrainian first lady Olena Zelenska on Wednesday called on Western leaders to offer more military support as the country continues to defend itself against Russia’s onslaught.

Zelenska urged the international community not to grow fatigued by the war, saying allied countries must fight the aggressor together.

“I understand that these are outside the duties of first ladies, but we are already outside the normal protocols because of the war,” Zelenska told CNBC’s Karen Tso, according to a translation.

“We want to take our children to school without fear, without worrying that a missile will strike us at any time. We need weapons for our soldiers to fight and it all comes, we are very grateful for that,“ Zelenska added.

Zelenska, who is the wife of Ukrainian President Volodymyr Zelenskyy, said Ukraine was grateful for the assistance received so far but added that continued support is needed, especially ahead of the winter.

As the war enters its ninth month, Zelenska said that the cold weather poses an additional crisis, with Russian President Vladimir Putin likely hoping to seize on waning resources and weakened morale in Ukraine, even as his own side suffers deep losses.

We want to take our children to school without fear.

She added that the West weakening its support now would be a tragedy not only for Ukraine but for all of Kyiv’s allies.

“The tragedy that happened to Ukraine touched everybody, we feel a strong support from everyone. If assistance will diminish, we will be in great danger,” she said.

Zelenska was speaking at the Web Summit conference in Lisbon, Portugal, where on Tuesday she highlighted the role of technology in the ongoing conflict.

The first lady described technology as a “battlefield” in the invasion, noting that technological equipment including drones and missiles were being used to kill people rather than save them.

About 40% of Ukraine’s energy infrastructure is estimated to have been seriously damaged by Russian missile and drone strikes, Zelenskyy said Wednesday.

Zelenska called on tech entrepreneurs and investors to invest in Ukraine’s tech and science sectors and make donations to her Olena Zelenska Foundation, which aims to restore Ukrainian hospitals and schools been destroyed in the war.

Children “should be flying to Mars, not running to their basements” to flee Russian shelling in war shelters, Zelenska said.

“You are the force that moves the world,” she continued. “You have the potential and technologies that can help, not destroy; that by helping Ukraine, you can move the world in the right direction.”

Zelenska has become a prominent figure following Russia’s invasion of Ukraine on Feb. 24, regularly meeting with global leaders and advocating for greater international support, particularly for children and mental health.

Amazon closes some warehouses in Florida as Hurricane Ian approaches