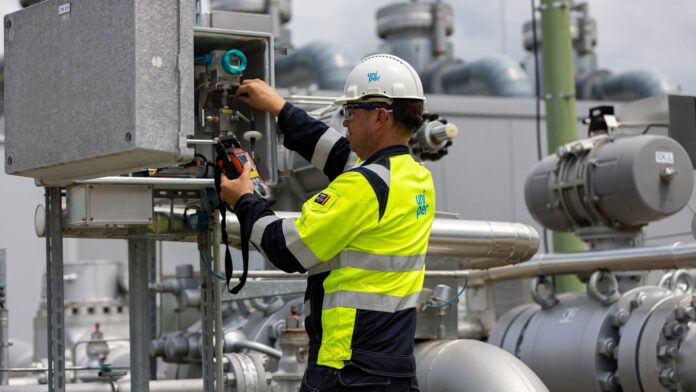 German energy giant Uniper on Friday said it is having to draw down gas from storage facilities, reducing supplies needed for winter even as Europe is experiencing an extreme heatwave.

The embattled utility told CNBC in a statement that reducing gas volumes from its own storage facilities was necessary “in order to supply our customers with gas and to secure the Uniper’s liquidity.”

Finnish majority-owner Fortum said last week that Uniper submitted a bailout application to the German government after running into extreme financial distress due to a scarcity of gas and soaring prices.

Germany’s economy ministry said Friday that there is still no timeframe for government assistance, according to Reuters.

Speaking to reporters at a press conference on July 8, Uniper CEO Klaus-Dieter Maubach warned that drawing down gas supplies from its storage facilities was a possibility due to the “enormous decrease” of imported gas from Russia.

Uniper CEO Klaus-Dieter Maubach addresses a press conference about the government’s rescue plan at the company’s headquarters in Duesseldorf, Germany on July 8, 2022.

It comes even as Europe is sweltering amid a heat wave that has seen temperatures exceed 40 degrees Celsius (104 degrees Fahrenheit) in several countries.

Droughts and wildfires have been recorded in Spain and Portugal and sweltering temperatures have spread to the U.K. and France. Climate scientists have repeatedly made clear that human-caused global heating is making heat waves more likely and more intense.

As scorching temperatures spread across the region, European policymakers remain focused on preparations for when the cold weather returns.

Governments are scrambling to fill underground storage with gas supplies to provide households with enough fuel to keep the lights on and homes warm during winter.

Uniper was the first German energy company to sound the alarm over soaring energy bills in the wake of Russia’s onslaught in Ukraine. The company has received only 40% of Russian contracted volumes in recent weeks and has been forced to source the replacement volumes at significantly higher prices.

Russia suspended deliveries via the Nord Stream 1 pipeline on July 11. The summer maintenance works are scheduled to run through to July 21.

Germany fears Russia may continue to throttle Europe’s energy supplies beyond the scheduled end of the Nord Stream 1 pipeline maintenance for “political reasons.”

The Kremlin has previously dismissed claims it is using oil and gas to exert political pressure over Europe.

Putin “talked about economic hardship as a result of energy problems in Europe leading to social conflict, leading to the rise of populist parties who would be more favorable to Russia. And, as he said, a change in elites in Europe,” Yergin said.

Putin’s aim “is to crack the alliance,” he told CNBC’s “Capital Connection” on Friday. “And so … the next few months are going to be really tough. It is going to be a race to see whether Europe can be in a position to have enough gas to get through the winter and Russia is going to do, I think, everything it can to ensure that it doesn’t get there.”

Yergin said he expects Europe’s winter energy problems to “reverberate around the world.”