HomePoliticsVoters under 40 apathetic towards Biden, concerned about inflation ahead of midterms
Politics

Voters under 40 apathetic towards Biden, concerned about inflation ahead of midterms 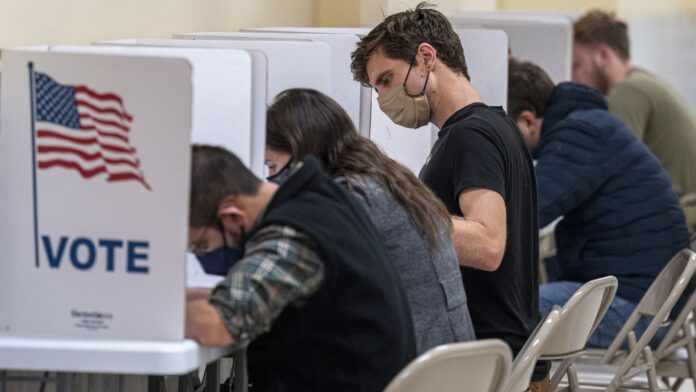 Only 10% of American adults under 40 strongly approve of President Joe Biden’s job performance in a new online poll; the number drops to 7% for Americans between the ages of 18 and 26.

One quarter of all respondents under 40 strongly disapproved of Biden’s performance.

The results are from an survey conducted by University of Chicago’s Gen Forward Survey Project. The online poll surveyed 2,294 Americans between the ages of 18 and 40 and has a margin of error of 3.55 percentage points.

Twenty-six percent of respondents said they “approve somewhat” of Biden’s performance and an additional 22% neither approve or disapprove.

“The Biden approval numbers are low but higher than Democratic or Republican Party favorability. We’re seeing low support across the board,” said Kumar Ramanathan, a Gen Forward research fellow. “We find that young adults express disaffection with the political system, but among the four entities that we asked about support and favorability — the president, the Democratic Party, the Republican Party and the Supreme Court — Biden has the highest approval, though his overall approval numbers are low.”

Inflation topped the list of concerns for young Americans, just as it has for months in polls of all demographics. Inflation was the only issue listed that received double digit support at 24% when asked what the most important problem facing the country is.

Consumers have been somewhat constrained by prices rising at close to their fastest pace in more than 40 years. The latest New York Fed Survey of Consumer Expectations shows that consumers expect the inflation rate a year from now to be 5.4%, the lowest number in a year and a decline from 5.75% in August.

Economic growth, income inequality and the environment and climate change all tied for second at 6% each. Inflation also topped the list of concerns when voters were asked what the greatest issue facing their community is.

Notably, when asked what the most important issue in the midterms, 25% said inflation and 11% said abortion and reproductive rights. When asked how the Supreme Court’s decision overturning Roe v. Wade impacted their vote, 32% said it made them more likely to support Democrats, 13% said Republicans and 32% said it did not impact their decision.

“Inflation is the most salient issue among young adults — specifically inflation, rather than general economic concerns,” Ramanathan said, noting that it’s increased from previous surveys. “More young adults say inflation makes them more likely to support Republicans than Democrats, but the plurality, about a third, say it won’t impact their vote.”

Nearly 90% of respondents agreed with the statement “inflation is having an impact on me and/or my family.” Three in ten projected that inflation will “go up a lot” and 39% projected it would “go up a little” in the next six months. Only 11% thought it would decrease. Eighty-five percent said it was likely there would be a recession in the next year with 34% saying it was “very likely” and 51% saying it was “somewhat likely.”

When asked how inflation impacted their vote, the results were more evenly split with 32% saying it did not impact their decision to vote, 24% saying it makes them more likely to support Republicans and 21% saying so for Democrats.