HomeInvestingWarren Buffett's Berkshire rings the register a bit on great investment in...
Investing 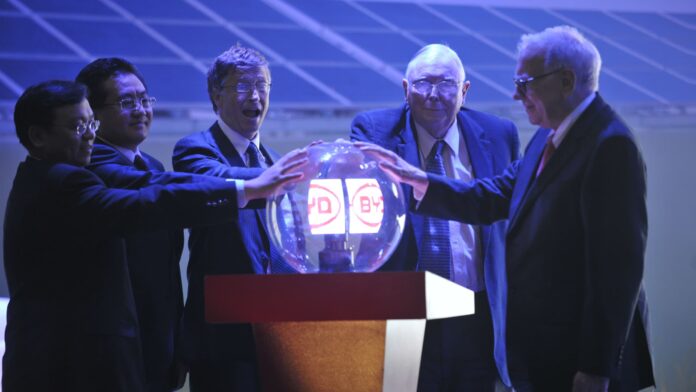 Warren Buffett’s Berkshire Hathaway has trimmed its stake in BYD , the biggest Chinese electric-vehicle maker, for the first time since its initial investment in 2008. Berkshire has sold 1.33 million Hong Kong-listed shares of BYD for around $47 million, according to a filing released Tuesday. After the sale, the Omaha-based conglomerate still owns 218.7 million shares, or a 19.92% stake in BYD, the filing showed. BYD just reported strong numbers for the first half of 2020 on Monday. Its net income in the six months through June totaled 3.6 billion yuan ($521 million), tripling from a year earlier. The conglomerate first bought about 220 million shares of BYD in September 2008. The stake has ballooned to $8 billion over the years as the EV market saw explosive growth in China and elsewhere. The stock has jumped more than 600% in the past 10 years. BYD is based in southern China and opened its North American headquarters in Los Angeles in 2011. Several regional transportation authorities in the U.S. use BYD vehicles, and the company said it makes more than half of all U.S. battery-electric buses. Charlie Munger, vice chairman of Berkshire, “deserves 100 percent of the credit for BYD,” Buffett said in 2010, according to the CNBC Warren Buffett archive. Munger was introduced to BYD by his friend Li Lu, founder of Seattle-based asset manager Himalaya Capital who has also managed money for the 98-year-old investor.

Credit scores are at an all-time high, despite rising consumer debt