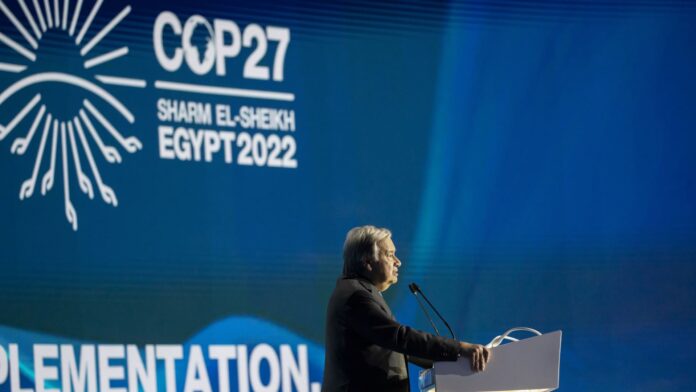 U.N. Secretary-General Antonio Guterres speaking at the COP27 climate change summit in Sharm El-Sheikh, Egypt. “We are on a highway to climate hell with our foot still on the accelerator,” he told attendees.

The United Nations secretary general issued a stark warning Monday, telling attendees at the COP27 summit that the world was losing its fight against climate change and repeating his call to phase-out coal by the year 2040.

“We are in the fight of our lives, and we are losing,” Antonio Guterres said.

“We are on a highway to climate hell with our foot still on the accelerator.”

Expanding on his point, the ex-prime minister of Portugal said the war Ukraine and other conflicts had “caused so much bloodshed and violence and had dramatic impacts all over the world.”

“But we cannot … accept that our attention is not focused on climate change.”

While collaboration was needed to bolster peace efforts and end “tremendous suffering,” climate change was “on a different timeline, and a different scale.”

“It is the defining issue of our age. It is the central challenge of our century. It is unacceptable, outrageous and self-defeating to put it on the back burner.”

Many of the conflicts taking place around the world, Guterres said, were “linked with growing climate chaos.”

The war in Ukraine had exposed “the profound risks of our fossil fuel addiction” and the crises of today could not, he argued, be used as an excuse for “backsliding or greenwashing.”

The climate problem had been caused by human activity, so the solution lay in human action, Guterres said.

“The science is clear: Any hope of limiting temperature rise to 1.5 degrees means achieving global net-zero emissions by 2050,” he later added. “But that 1.5 degree goal is on life support — and the machines are rattling.”

The reference to 1.5 degrees is a nod to 2015’s Paris Agreement, which aims to “limit global warming to well below 2, preferably to 1.5 degrees Celsius, compared to pre-industrial levels.”

Cutting human-made carbon dioxide emissions to net-zero by 2050 is seen as crucial when it comes to meeting the 1.5 degrees Celsius target.

Guterres told those attending COP27 that the point of no return was now dangerously close. “To avoid that dire fate, all G-20 countries must accelerate their transition now.”

Among other things, Guterres said the pact would see countries undertake extra efforts to cut emissions this decade and also “end dependence on fossil fuels and the building of new coal plants — phasing out coal in OECD countries by 2030 and everywhere else by 2040.”

Guterres has previously called for a phase-out of coal, a fossil fuel that has a substantial effect on the environment.

The U.S. Energy Information Administration lists a range of emissions from coal combustion, including carbon dioxide, sulfur dioxide, particulates and nitrogen oxides. It has been described by Greenpeace as “the dirtiest, most polluting way of producing energy.”

Coal has proved to be a contentious subject at climate change conferences.

At last year’s COP26 summit, India and China, both among the world’s biggest burners of coal, insisted on a last-minute change of fossil fuel language in the Glasgow Climate Pact — from a “phase out” of coal to a “phase down.” After initial objections, opposing countries ultimately conceded.

Back in Egypt, Guterres said the U.S. and China both had “a particular responsibility to join efforts to make this pact a reality.”

“Humanity has a choice,” he later added. “Cooperate or perish. It is either a Climate Solidarity Pact, or a Collective Suicide Pact.”

A long-overdue reality check has reset the bar