HomeInvestingWhat Walmart's profit warning means for Amazon, Target and the rest of...
Investing

What Walmart’s profit warning means for Amazon, Target and the rest of retail 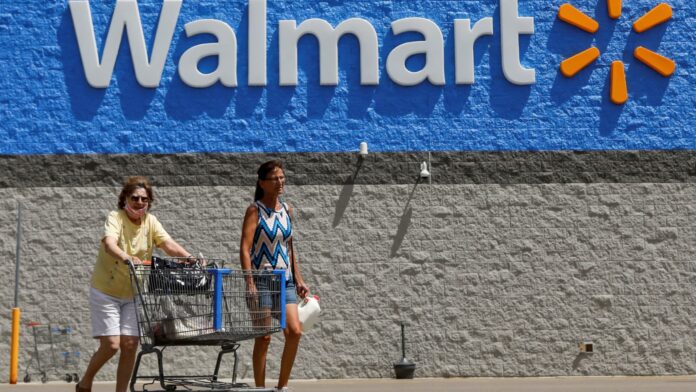 Walmart ‘s recent profit warning could spell trouble for the broader retail market while further driving concerns that a recession may be sooner than anticipated, according to some analysts. The retailer on Monday slashed its profit outlook for the quarter and full year as shoppers shift spending from discretionary items like clothing and electronics toward necessities in the face of inflation. The news sent Walmart shares tumbling more than 8% in extended trading. “WMT’s negative preannouncement reinforces our cautious view on the center-store food companies as it points to increasing risk of trade down to lower priced private label brands and potential for retailer pushback to packaged food companies’ plans for incremental price increase,” wrote Morgan Stanley analyst Pamela Kaufman in a note to clients Monday. She is underweight packaged food companies J.M. Smucker and General Mills . According to Kaufman, packaged food businesses and suppliers could face increasing pushback from retailers like Walmart looking to drive down costs in the near-term — or even switch to private labels which have accelerated market share gains in recent months. At the same time, Walmart continues upping its share in the grocery industry, which supports the bank’s continued bullish outlook on the stock. Walmart may be one of the first within its sector to cut guidance this earnings season, but it’s unlikely to be the last one. JPMorgan, which cut its price target on Walmart to $128 per share from $134, expects a likely revision from Target ahead. “Laterally, the prospect of guidance cuts for many in our coverage is highly likely especially as weakness moves up the income spectrum, housing softens, and the high end consumer pauses on the negative wealth effect, along with our long held view of share of wallet normalization,” wrote analyst Christopher Horvers in a note to clients on Monday. According to Citi analyst Paul Lejuez, the findings from Walmart may signal that the market may be entering an apparel recession and that some customers with slightly higher income are starting to take a hit. The move could also spell trouble ahead for Amazon . Bank of America analyst Justin Post said in a note to clients that he expects added pressure on the e-commerce giant’s margins as consumers move away from many discretionary items despite the easing of some supply chain issues. To be sure, many analysts remain bullish on the stock going forward despite these concerns. “We acknowledge the company’s improving profitability profile will now take longer to come to fruition (we estimate beginning in FY23), but we reiterate our Buy rating (on CL) for WMT given strong top line trends supported by market share gains,” wrote Goldman Sachs’ Kate McShane in a note to clients Monday evening. Still, she trimmed her target on the stock to $135 per share from $138. The cost pressures on Walmart are likely only temporary and the company retains “solid visibility into the path towards improvement,” she said. — CNBC’s Michael Bloom contributed reporting

CrowdStrike is well-positioned for a recessionary environment, Stephens says