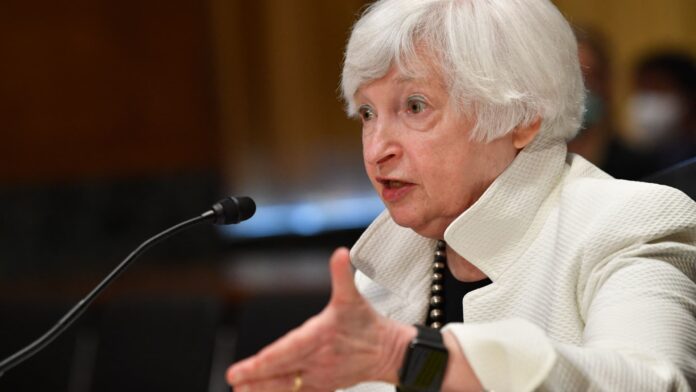 Treasury Secretary Janet Yellen said Thursday the U.S. economy is in a state of transition, not recession, despite two consecutive quarters of negative growth.

Recession, Yellen insisted, is a “broad-based weakening of our economy” that includes substantial layoffs, business closures, strains in household finances and a slowdown in private sector activity.

“That is not what we are seeing right now,” she said during an afternoon news conference at the Treasury. “When you look at the economy, job creation is continuing, household finances remain strong, consumers are spending and businesses are growing.”

Those comments, though, came on the same day that the Commerce Department’s Bureau of Economic Analysis reported that gross domestic product, the broadest measure of economic activity, fell 0.9% in the second quarter.

Coming on the heels of a 1.6% contraction in the first quarter, the two straight declines meet a commonly used definition of recession. The National Bureau of Economic Research, however, is the official arbiter of recessions, and likely won’t rule for months.

Yellen started her remarks with a list of the administration’s economic accomplishments, including nonfarm payroll growth of more than 9 million.

But inflation has proven the bigger obstacle, rising to 9.1% in June while economic growth has failed to keep up. Consumer and business confidence levels have plunged, with recent surveys showing a solid majority of Americans believe the country is in recession.

Yellen acknowledged the burden that higher prices carry and said the administration is “laser-focused” on addressing the situation.

“We’ve entered a new phase in our recovery focused on achieving steady, stable growth without sacrificing the gains of the last 18 months,” she said. “We know there are challenges ahead of us. Growth is slowing globally. Inflation remains unacceptably high, and it’s this administration’s top priority to bring it down.”

President Joe Biden and Yellen both touted the possibilities of a new bill that Democratic lawmakers apparently have agreed on to fight inflation. The legislation is aimed at raising tax revenue, lowering drug costs and investing in renewable energy.

Yellen noted that while the Federal Reserve, which she chaired from 2014-18, has “the primary role in bringing down inflation, the president and I are committed to taking action do drive down costs and protect Americans from the global pressures we face.”

The Fed has raised rates four times this year, for a total of 2.25 percentage points, and likely will add more increases later in the year.

Yellen attributed rising inflation to the war in Ukraine, supply chain problems and the Covid pandemic. She did not discuss the impact that monetary and fiscal stimulus had on price pressures.