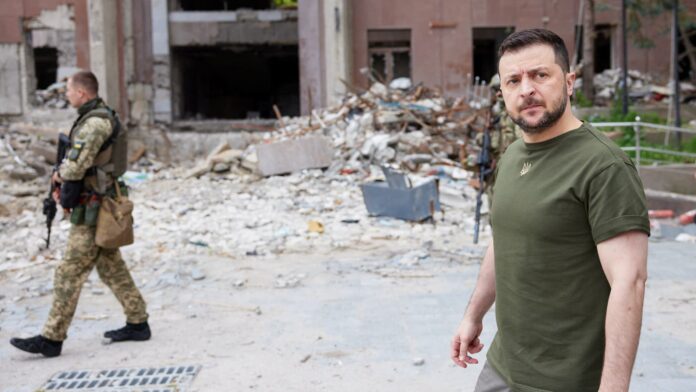 Ukraine’s President Volodymyr Zelenskyy walks on a street during a visit to the southern city of Mykolaiv, as Russia’s attack on Ukraine continues, Ukraine June 18, 2022.

Ukrainian President Volodymyr Zelenskyy on Saturday said Ukraine would win back all the cities it had lost to Russia, including Sievierodonetsk, and admitted the war was becoming tough to handle emotionally.

In a late-night video address, he also said Ukraine had been hit by 45 Russian missiles and rockets over the previous 24 hours, which he described as a cynical but doomed attempt to break his people’s spirits.

“Therefore all our cities — Sievierodonetsk, Donetsk, Luhansk — we’ll get them all back,” he said.

It was the only time in the address that he mentioned Sievierodonetsk, which finally fell to Moscow’s forces earlier in the day after weeks of brutal fighting.

“At this stage of the war it’s spiritually difficult, emotionally difficult … we don’t have a sense of long it will last, how many more blows, losses and efforts will be needed before we see victory is on the horizon,” he said.

The relentless missile attacks confirmed that sanctions against Russia were not enough to help Ukraine, which needed more weapons, he said.

“The air defense systems — the modern systems that our partners have — should not be on training grounds or in storage, but in Ukraine, where they are needed now, needed more than anywhere else in the world,” he said.