HomeUSAAccused fraudster Justin Costello has history of posing as billionaire and threatening...
USA 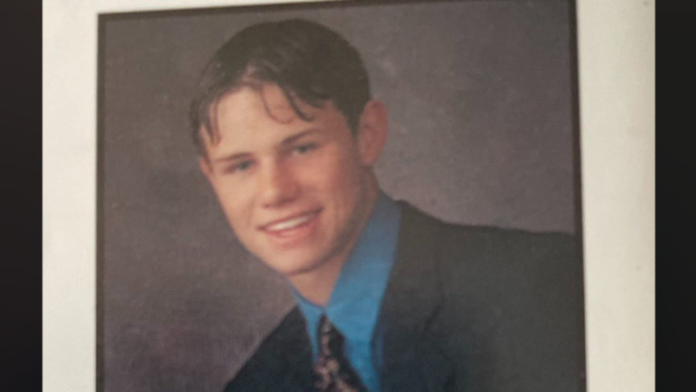 “It’s easy to be someone you’re not, but hard to be yourself,” Wisconsin teenager Justin Costello wrote under his senior photo in the Oconomowoc High School yearbook in 1999.

Twenty-three years later, an FBI SWAT team would arrest Costello hiding from police outside of San Diego, in part, because he was posing as someone he wasn’t: a billionaire with a Harvard MBA who was a twice-wounded Special Forces Iraq veteran.

None of those claims were true, authorities say.

The now-42-year-old was charged Sept. 28 with criminal wire and securities fraud for allegedly swindling $35 million from thousands of investors and others whose trust he won because they thought he was a war hero who had become a wealthy and successful cannabis billionaire, federal prosecutors say.

Although he didn’t do any of those things, according to prosecutors, he did make it on the FBI’s Most Wanted list for failing to surrender to authorities.

When he was apprehended in California, FBI agents said Costello had taken on yet another new identity: “Christian Bolter,” according to the driver’s license he was carrying. He also had $60,000 in U.S. currency, $10,000 in Mexican pesos, and six gold bars valued at $12,000 when he was nabbed, court records show.

Cash and gold bars as detailed in court filing in US District court in San Diego in case of former fugitive Justin Costello.

A federal magistrate judge in San Diego ordered him detained without bail on Oct. 25, saying he was “an economic danger to the community.”

Prosecutors had argued that Costello, who has ties to California, Las Vegas and Washington, was “a serious flight risk.”

That’s the same court where Costello and another man, David Ferraro, were slapped in October with a civil lawsuit by the Securities and Exchange Commission, which accused Costello of conduct that is mirrored in the criminal complaint.

The SEC last week agreed to settle the civil allegations against Ferraro, a 44-year-old Radford, Virginia, resident who was accused of using his Twitter account to help Costello with multiple penny stock pump-and-dump schemes.

A judge on Monday signed off on the deal with Ferraro, who agreed to several conditions, while neither admitting nor denying the allegations. The judge has yet to determine monetary penalties against Ferraro, who is not charged in the criminal case.

Costello’s recent arrest is not the first time he has run into trouble with the law — or posed as a billionaire, court and police records show.

Three years before his latest arrest, he brazenly claimed to be a billionaire in an unsuccessful bid to avoid arrest during a separate incident in Washington state, a police report obtained by CNBC shows.

Police in Snoqualmie, Washington, arrested Costello on Sept. 15, 2019, after receiving a report that he was causing a drunken disturbance at the luxurious Salish Lodge & Spa, according to police and court records.

Officers arrived at Salish Lodge at about 10:30 p.m. that night after an employee of that location reported “a drunk male in front of the business being disruptive and verbal with employees,” and was “threatening a valet driver,” according to the report.

Employees told police that Costello had been screaming profanities on a phone, threatened his girlfriend’s sister and then grabbed the valet driver who was looking at Costello before threatening to send “his boys after” the worker, the report reveals.

One employee said he was convinced Costello was “a billionaire from Bellevue,” a city just outside Seattle, and that Costello had the means to send people after him, police wrote.

Costello was agitated when police arrived on the scene, the report said, and claimed to be a “really rich man … I’m a billionaire.”

“You messed with the wrong dude,” he told one cop, according to the report.

One of the officers said Costello approached him with “clenched fists” and in an aggressive manner that suggested he would “cause harm to myself or another member of the group behind me,” the police report recounted.

The officer said he threatened three times to use his taser on Costello, who allegedly ignored his commands to stop until he was about 10 feet to 12 feet away before dropping to the ground.

The arresting officer later said Costello appeared to be “impaired,” even though police couldn’t detect any alcohol. Even after he was cuffed, Costello continued to hurl profanities and threats at police, they said in the report.

“I’m going to civilly hit you in the f—ing a–,” Costello allegedly said to one of the officers. “This is going to cost you brother, a lot of money.”

“Bro, take these handcuffs off, so I can kick your ass,” he allegedly told a second cop, the report says. “I’m going to own you, motherf—er.”

Costello was booked at the King County Jail on a felony charge of intimidating a public servant. Prosecutors ultimately charged him in Issaquah Municipal Court with obstruction, related to the allegation of disorderly conduct, and two counts of harassment.

In Alford pleas, a defendant does not admit guilt but concedes that prosecutors have enough evidence to convict them if a trial were to be held. A judge then finds the defendant to be guilty.

Moberly said that Costello was also able to get the two counts of harassment dismissed after the victims in the case agreed to settle in exchange for $3,000 apiece. Although she opposed that deal, it’s legal under Washington criminal law and a judge signed off on it, Moberly said.

Even after charges were filed in court, Costello kept up his charade as a cannabis billionaire.

Moberly said his lawyer told her at the time that Costello could “afford to pay off these witnesses.” Costello’s lawyer allegedly said his client was a “Harvard grad” who was “involved in the marijuana business,” Moberly recalled.

Costello’s sentence was deferred, according to the prosecutor. He was ordered to complete 40 hours of community service, avoid consuming alcohol and drugs for a year, and to have no contact with the witnesses or the lodge, according to the plea deal.

The case was dismissed a year later, in July 2021, Moberly said.

Stephen Lobbin, an attorney who represents Costello in another separate civil lawsuit in California by one of three cannabis companies that claims it was allegedly swindled by Costello, said his client also told him he spent some time in Iraq and took some classes at Harvard.

“If he says it, I suppose it’s true,” he said in an interview.

As far as his claims of being a billionaire and war hero, Lobbin said those allegations are based on hearsay.

“I know him to be a very warm and friendly and personable guy,” Lobbin said.

When asked about Costello’s 2019 arrest, Lobbin said: “I’ve spent enough time with him” and never known him to be “drunk or disorderly.“

In the civil case in which Lobbin represents him, Costello submitted a sworn declaration in September, that said at least $2.9 million of the company’s funds were being held in a Tacoma, Wash., credit union account in the name of a Costello company.

That account actually had a balance of $15.35 as of Sept. 9, according to the federal criminal indictment against Costello.

“Like anything in life, there are two sides to a story,” Lobbin said. “I don’t know anything about what the government is talking about.”

Beyond Meat stock falls after conclusion of McDonald’s McPlant test

What travelers need to know as airlines deal with lost, delayed bags