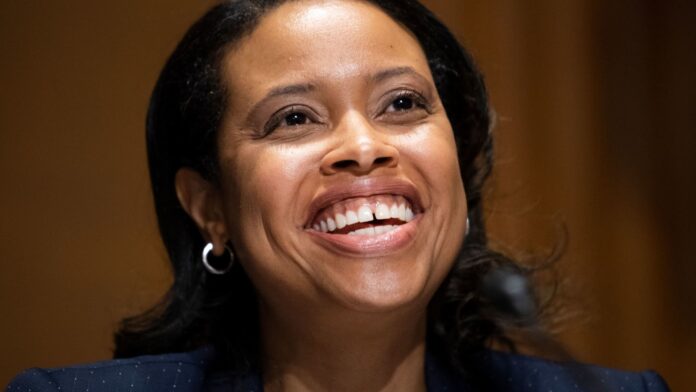 Chiquita Brooks-LaSure testifies before the Senate Finance Committee during her nomination hearing to be administrator of the Centers for Medicare & Medicaid Services in Washington on Thursday, April 15, 2021.

In her first year as administrator of the Centers for Medicare and Medicaid Services, Chiquita Brooks-Lasure has overseen the expansion of government health coverage to a record number of Americans under Medicare, Medicaid and private Affordable Care Act exchange plans.

Now, she wants to keep them insured, and expand access to services for women.

“We cover over 150 million people as a result of all of the hard work of the agency really enrolling people in coverage. So, we are a huge payer, and we help dictate coverage in this country … and have a powerful opportunity to advance health equity,” Brooks-Lasure said.

In the year ahead, one of the agency’s biggest challenges will be to create a smooth transition for millions of Medicaid members who could lose coverage when the Covid public health emergency ends. Under the federal health emergency, states have put eligibility redeterminations on hold for the last two years.

While the administration is expected to renew the current emergency designation next month, a Kaiser Family Foundation study estimated that between 5 million and 14 million people could be disenrolled when redeterminations resume.

Brooks-Lasure says health insurers that administer state Medicaid programs will play an important role to help those who lose eligibility to transition to private exchange health plans, or Medicare if they’ve turned 65.

“We have more plan participation, particularly in Medicaid coverage, than we did, say, 10 years ago. So they are a key component to helping make sure that we — and by we, I also mean the states — move people to whatever type of coverage they are eligible for,” she said.

Even beyond the public health emergency, she wants health coverage to be more consistent across public and private programs.

“Because whether it’s talking about maternal health or you’re in the middle of cancer treatment … you want to stay focused on the condition itself rather than having to worry about what changed in your coverage,” she said.

In a new report outlining priorities for the agency, Brooks-Lasure says addressing health disparities is a central pillar of the agency’s mission. It’s been especially focused on improving maternal health coverage; Medicaid programs now cover 40% of births in the U.S. With funding from the American Rescue Plan Act, passed in 2021, the agency is working with states to expand Medicaid coverage for new mothers who are uninsured from 60 days to 12 months.

When it comes to reproductive care, Brooks-Lasure said CMS will also prioritize improving access to contraception in Medicaid and ACA health plans in the year ahead. If the Supreme Court overturns Roe v. Wade, as expected this month, the agency will be limited in its ability to provide access to abortion for women on Medicaid under federal funding rules.

Brooks-Lasure said the agency was focused on areas it has authority over, such as preventative care and contraception. She said CMS is encouraging states to use Medicaid to ensure men and women have access to birth control, “in light of whatever the Supreme Court decision is regarding broader services.”

One of the biggest decisions CMS issued this year was to limit Medicare coverage for the Alzheimer’s treatment Aduhelm, after mixed data on the drug’s efficacy. However, the move came after actuaries had factored in the expected high cost of the drug into 2022 Medicare premiums. Medicare recipients can expect a rollback in 2023.

“Because coverage is lower, we are going to incorporate that in the premium for next year,” Brooks-Lasure said.

Medicare recipients could also get a break on drug plan premiums with the introduction of several biosimilar versions of AbbVie’s high-priced arthritis treatment Humira over the next year. Humira sales topped $20 billion in 2021. Amgen’s biosimilar version will be the first to go on sale in the U.S., in January.

Brooks-Lasure said CMS actuaries are calculating the potential impact of the transition to Humira biosimilars and are expected to release their analysis in early September, in time for setting 2023 premiums.

How the fall of Three Arrows, or 3AC, dragged down crypto investors