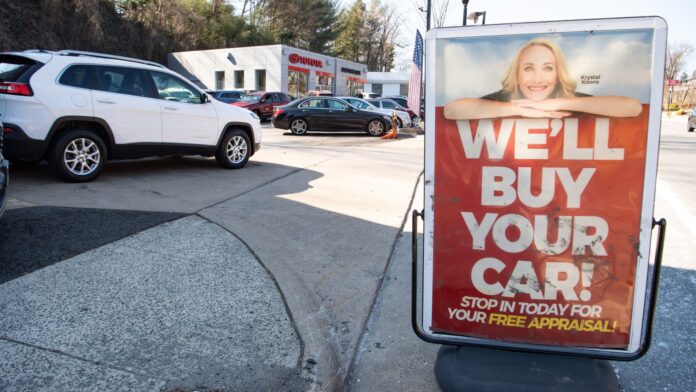 A sign advertises to purchase cars at a used car dealership in Arlington, Virginia, February 15, 2022.

DETROIT – If investors are looking for signs of a recession or weakening consumer spending, they can skip over new vehicle prices, which hit a new record in June.

Fueled by pent-up consumer demand, low vehicle inventories and rising sales of luxury vehicles, Cox Automotive reported this week the average transaction price of a new vehicle last month was $48,083 – a 1.9% increase from May and higher than the previous record of $47,202 set in December.

The average sale price was part of a broader increase in consumer spending in June, according to the Bureau of Labor Statistics. The consumer price index, a measure of everyday goods and services, soared 9.1% from a year ago, above the 8.8% Dow Jones estimate.

Much of the inflation rise came from gasoline prices, which increased 11.2% on the month and just shy of 60% for the 12-month period. New and used vehicle prices posted respective monthly gains of 0.7% and 1.6%, according to the BLS.

Cox said June continued this year’s streak of consumers paying more than the manufacturer’s suggested retail price, or “sticker price,” for a new vehicle, according to Cox. The automotive research firm reported new vehicles from Honda Motor, Kia and Mercedes-Benz transacted on average between 6.5% and 8.7% over MSRP.

–Jeff Cox contributed to this report.

Jim Cramer says ‘exhausted’ sellers are behind the market’s strength

These are Wall Street’s favorite Dow stocks, and where analysts think they’re going