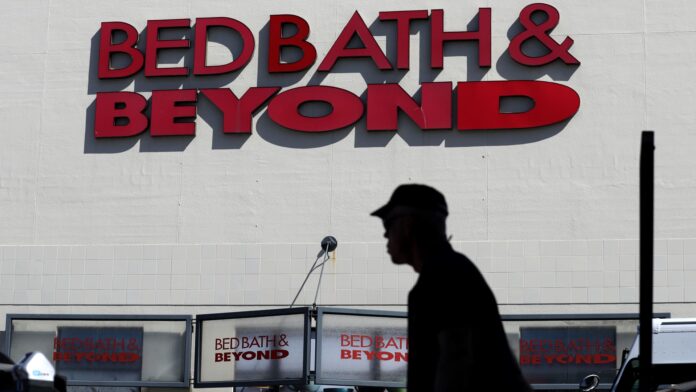 A pedestrian walks by a Bed Bath and Beyond store in San Francisco, California.

Bed Bath & Beyond is replacing CEO Mark Tritton in a leadership shakeup after the retailer struggled through another quarter of declining sales and posted a steeper loss.

The company said Wednesday that Sue Gove, an independent director on the board, will step in as interim CEO. The change comes after a multi-year push to revive Bed Bath’s brand, grow online sales and win back customers. Tritton, a Target veteran, had led the effort after joining in 2019.

Shares were down about 20% in morning trading.

But along with company challenges, Bed Bath is facing a tougher economic backdrop.

“I step into this role keenly aware of the macro-economic environment,” Gove said in a statement, citing steep inflation and shifting buying habits.

Still, Gove said the company needs to improve its performance and that its first quarter results are “not up to our expectations.” In addition to working to fix supply chain problems, reduce costs and improve its balance sheet, Gove said Bed Bath & Beyond will embrace a “back to basics mantra” to win back customers.

Bed Bath & Beyond said it expects same-store sales to recover in the second half of the fiscal year, but did not provide a specific forecast.

The retailer also named a new chief merchandising officer. Mara Sirhal, who most recently served as general merchandise manager of health, beauty and consumables, will replace Joe Hartsig, who is leaving the company.

Here’s how the retailer did in the three-month period ended May 28 compared with what analysts were anticipating, based on Refinitiv data:

Same-store sales, a key retail metric, declined 24% in the quarter compared with a year ago, worse than the 20.1% drop that analysts expected, according to StreetAccount. Online sales fell by 21% year over year. The figures include a 27% drop for its Bed Bath & Beyond banner and a mid single-digits decline for the Buybuy Baby banner.

The leadership shakeup comes after a more than two-year effort to revive the company’s brand, grow its online business and win back customers who have fled to other places to buy towels, stock up on dorm supplies and register for weddings.

Under Tritton, a Target veteran, the company launched numerous private label brands, shuttered underperforming locations and remodeled stores. Despite the efforts, Bed Bath struggled to reverse trends and bumped into new obstacles. During the holiday quarter, for example, the company missed out on about $175 million in sales because of out-of-stocks. Merchandise got stuck at ports and there were shortages of items like vacuums because of the lack of microchips.

In the most recent quarter, by contrast, Bed Bath racked up excess inventory as demand fell, Chief Financial Officer Gustavo Arnal said. Inventory rose about 15% from a year ago, he said.

He told analysts the company will move quickly to clear excess inventory, a problem other retailers including Target face.

Bed Bath will reduce full-year capital expenditures by at least $100 million to about $300 million, too, Arnal said.

Bed Bath has been under pressure from activist investor Ryan Cohen, chairman of GameStop and co-founder of Chewy. Early this year, Cohen’s firm, RC Ventures, revealed a 10% stake in the company. Cohen called for sweeping changes, criticized top executives’ high pay and urged the sale or spinoff of the company’s baby gear chain, Buybuy Baby.

Bed Bath and Cohen came to a truce in late March. The retailer agreed to add new independent directors to its board and look into alternatives for the Buybuy Baby chain. But the challenges for the home goods retailer have not let up.

Bed Bath on Wednesday said a board committee is looking into ways to maximize the value of its baby chain, including by boosting its registry program and by improving its website and app. Gove did not rule out a potential sale of the business.

“The business is a very attractive business and we’re not alone in appreciating its value. We know there is interest,” she said on the call with analysts.

Bed Bath & Beyond said it hired retail advisory firm Berkeley Research Group to look at its inventory and balance sheet. It has also hired national search firm, Russell Reynolds, to look for a permanent CEO.