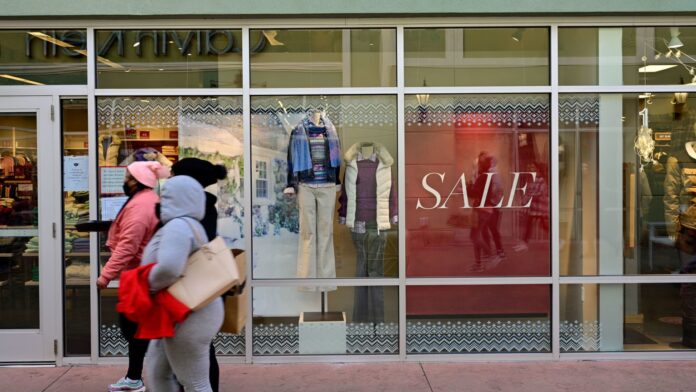 Shoppers walk past a sale sign as Black Friday sales begin at The Outlet Shoppes of the Bluegrass in Simpsonville, Kentucky, November 26, 2021.

Major retailers are under intense pressure to deliver on Black Friday after several of them reported a slowdown in sales heading into the do-or-die holiday shopping season.

Macy’s, Target, Kohl’s, Gap and Nordstrom spoke about a lull in sales in late October and early November. Target cut its holiday-quarter outlook and Kohl’s pulled its forecast, citing the slow sales. Macy’s CEO Jeff Gennette said shoppers kept visiting its stores and website during that lull, but the browsing did not turn into buying. Best Buy CEO Corie Barry said shoppers are showing more interest in sales than usual.

Those results illustrate an emerging theme of this season: Shoppers are holding out for the biggest and best deals — especially as inflation hits their wallets.

“People are willing to wait and be patient,” said Rob Garf, vice president and general manager of retail for Salesforce, a software company that also tracks shopping trends. “The game of discount chicken is back and consumers will ultimately win.”

That big appetite for deals is fueling higher expectations for a bigger Black Friday weekend. Many major retailers, including Walmart and Target, will remain shuttered on Thanksgiving. Yet a record number of people — 166.3 million — are expected to shop during the weekend, which stretches from Thursday through Cyber Monday, according to an annual survey by the National Retail Federation and Prosper Insights & Analytics.

That is up by nearly 8 million people than a year ago and the highest estimate since NRF began tracking the data in 2017.

Retailers and industry watchers have been anticipating a more muted holiday season with sales driven more by higher prices than a huge appetite for goods. The National Retail Federation is predicting a 6% to 8% increase in sales, including the boost from nearly record-high levels of inflation.

Travel and experiences are competing more fiercely for Americans’ wallets, too, as Covid-19 concerns fade.

Retail executives that have reported earnings have spoken of a shift back to the pre-pandemic style of gift purchasing. In the past two years, consumers shopped earlier and spread out gift-buying because of worries of shipping delays and out-of-stocks caused by a spike in online sales and congested ports.

This year, retailers once again started their sales early — but geared them toward selling excess inventory and catering to a more value-oriented consumer. Amazon threw a second Prime Day-like sale in October, and Target and Walmart had competing sales around the same time.

Yet so far, shoppers have been in no rush to buy.

Barry, the Best Buy CEO, said the company’s October sales were the slowest in the quarter compared with last year. She said the backdrop is very different from a year ago, when shoppers bought early and worried they may not get all the items on their wish list.

“That impetus to purchase just isn’t there this year,” she said. “Your average consumer knows there’s plenty of inventory and it’s going to be priced competitively.”

She said Best Buy now expects customers to spend more during Black Friday, Cyber Monday and the two weeks leading up to Christmas. The company has extended hours, staffed stores and even timed inventory for that schedule, she said.

Other factors may have dampened demand in late October and November, too. On recent earnings calls, Gap and Nordstrom executives referred to unseasonably warm weather in the fall, which may have inspired consumers to hold off from dashing to stores to buy winter coats or heavy sweaters.

Plus, some Americans were tuning in to the midterm elections — highly contested races that caught their attention and may have contributed to economic uncertainty, too, said Chris Horvers, an equity research analyst who covers retail for JPMorgan.

But, he added, a weaker start to the holidays has also set off some alarms about the health of the consumer. Retailers have been cautious when sharing hopes for the season — and they have alluded to consumers who are dipping into savings accounts and running up credit card balances, despite putting up stronger-than-feared results for the third quarter.

Plus, he said, it’s not all good news if people show up for Black Friday weekend.

“If the consumer is responsive to promotions this week and shops but then stops spending shortly thereafter, it’s going to reinforce this concern retailers already have that the consumer is only shopping in need and only is going to shop when there’s a discount.”