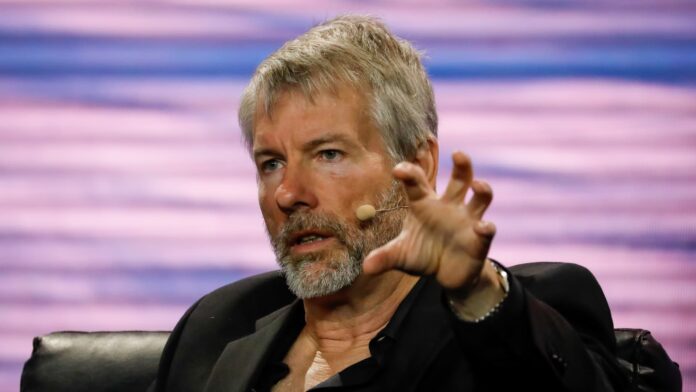 Michael Saylor, chairman and chief executive officer of MicroStrategy, first got into bitcoin in 2020, when he decided to start adding the cryptocurrency to MicroStrategy’s balance sheet as part of an unorthodox treasury management strategy.

Having once lost $6 billion at the height of the dotcom bubble, software entrepreneur Michael Saylor is no stranger to volatility in the financial markets.

In 1999, MicroStrategy, Saylor’s software firm, admitted to overstating its revenues and erroneously reporting a profit when it actually made a loss. The fiasco shaved over $11 billion off MicroStrategy’s stock market value in a single day.

Now, more than two decades later, MicroStrategy is again facing questions over some of its accounting practices — this time in relation to a $4 billion bet on bitcoin.

The world’s biggest cryptocurrency briefly tumbled below $21,000 Tuesday, a key level at which MicroStrategy would be faced with a possible margin call that investors fear could force the company to liquidate its bitcoin holdings.

MicroStrategy was not immediately available for comment when contacted by CNBC.

In a tweet Tuesday, Saylor said MicroStrategy “anticipated volatility and structured its balance sheet so that it could continue to #HODL through adversity.” HODL is a slang term in crypto aimed at discouraging investors from selling.

Saylor first got into bitcoin in 2020, when he decided to start adding the cryptocurrency to MicroStrategy’s balance sheet as part of an unorthodox treasury management strategy.

His belief was a common one among the crypto faithful — that bitcoin provides a store of value uncorrelated with traditional financial markets.

That’s turned out to be a risky gamble, with digital currencies now moving in lockstep with stocks and other assets plunging amid fears of an aggressive interest rate hiking cycle from the Federal Reserve.

Bitcoin’s price plunged 10% to $20,843 on Tuesday, extending a brutal sell-off and dragging it deeper into levels not seen since December 2020. It comes after crypto lending firm Celsius halted withdrawals on Monday, citing “extreme market conditions.”

MicroStrategy has bet billions on the cryptocurrency — $3.97 billion, to be exact. As at March 31, MicroStrategy held 129,218 bitcoins, each purchased at an average price of $30,700, according to a company filing.

With bitcoin currently trading at $22,818, MicroStrategy’s crypto stash would now be worth just over $2.9 billion. That translates to an unrealized loss of more than $1 billion.

To add to MicroStrategy’s woes, the company now faces what’s known as a “margin call,” a situation where an investor has to commit more funds to avoid losses on a trade augmented with borrowed cash.

The company took out a $205 million loan from Silvergate, a crypto-focused bank, to continue its bitcoin buying spree. To secure the loan, MicroStrategy posted some of the bitcoin it held on its books as collateral.

Silvergate did not immediately return a request for comment.

On an earnings call in May, MicroStrategy Chief Financial Officer Phong Le explained that if bitcoin were to fall below $21,000, it could be faced with a margin call where it’s forced to cough up more bitcoin — or sell some of its holdings — to meet its collateral requirements. Bitcoin briefly slipped below that level Tuesday.

“Bitcoin needs to cut in half or around $21,000 before we’d have a margin call,” Le said at the time. “That said, before it gets to 50%, we could contribute more Bitcoin to the collateral package, so it never gets there.”

It’s not yet clear if MicroStrategy has pledged more funds to secure the loan.

In June, Saylor insisted the company has more than enough bitcoin to cover its collateral requirements. The cryptocurrency would need to slump to $3,500 before it had to come up with more collateral, he added.

Shares of MicroStrategy, considered by some as a proxy for investing in bitcoin, tumbled more than 25% on Tuesday, taking its year-to-date losses to over 70%. That’s even worse than bitcoin’s performance — the No. 1 digital coin has roughly halved in price since the start of 2022.

WATCH: Crypto enthusiasts want to reshape the internet with ‘Web3.’ Here’s what that means