HomePoliticsBoris Johnson is going, and strategists are betting on big changes to...
Politics

Boris Johnson is going, and strategists are betting on big changes to the UK economy 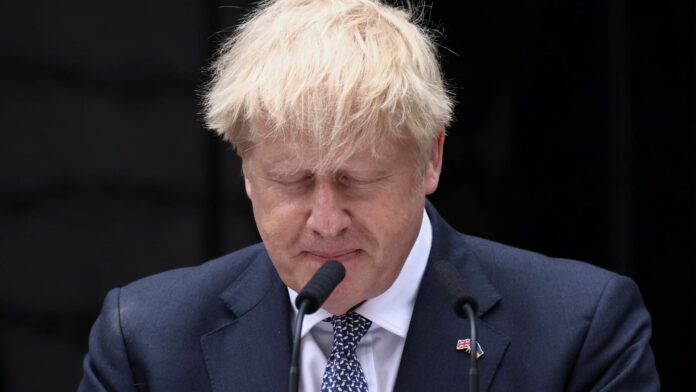 LONDON — U.K. Prime Minister Boris Johnson’s eventual successor is likely to bring forth greater fiscal support and less-fractious relations with the European Union, according to economists.

Johnson formally resigned as leader of the Conservative Party on Thursday, but said he would stay at Downing Street until a successor is chosen — despite many calling for him to step aside immediately and allow a less controversial “caretaker” to take over in the interim.

Exactly when a new leader will be appointed is unclear, but reports suggest the aim is to have one confirmed before the Conservative Party conference in October. By Monday morning, 11 hopefuls had entered the race to replace Johnson with Rishi Sunak, Penny Mordaunt and Liz Truss the favorites, according to the U.K. bookmakers.

The prime minister’s ousting coincides with a particularly perilous period for the U.K. economy. Inflation hit a new 40-year high of 9.1% in May as soaring food and energy costs deepened the country’s cost-of-living crisis.

Meanwhile the economy unexpectedly shrank in April to mark the first consecutive GDP contractions since the start of the Covid-19 pandemic — and the U.K. is widely tipped to experience a technical recession in the second half of the year.

The Office for Budget Responsibility, the U.K.’s independent fiscal body, has projected that real disposable incomes will fall by 2.2% this financial year (2022/2023), the largest annual decline since records began, as the squeeze in household spending power persists.

“Additionally, the uncertainty around the duration and outcome of the conflict in Ukraine is likely to adversely affect investments, as well as export performance via secondary effects on the growth outlook for the EU, the U.K.’s key trading partner,” said Boris Glass, senior U.K. economist at S&P Global Ratings.

“Given the aforementioned inflation squeeze, the Bank of England‘s (BOE’s) tightening of monetary policy, and no end in sight to the Russia-Ukraine conflict, we project 1% growth for the U.K. for 2023, the lowest rate among G-7 countries.”

Former Finance Minister Sunak, whose resignation was one of two which triggered the eventual end of Johnson’s tenure, announced a series of measures over the last six months in an effort to combat the cost-of-living crisis, including a windfall tax on oil and gas majors and a one-off payment to 8 million of the lowest-income households.

However, economists broadly expect whichever candidate takes the reins from Johnson to up the ante on fiscal support for the ailing economy.

Modupe Adegbembo, G-7 economist at AXA Investment Management, said a key question is whether Johnson uses his “caretaker” period as prime minister — should he be granted one — to push through short-term fiscal policies.

“However, when a new Prime Minister is appointed, we see an increased likelihood of additional fiscal spending and/or tax cuts,” Adegbembo said in a note Thursday.

“The potential to accelerate income tax cuts penciled in for 2024 may be floated by some candidates, although remains challenging in the light of public finance developments.”

Her comments were echoed by strategists at UBS, who said a change in leadership makes further fiscal support more likely as a new prime minister will “want to prove themselves.”

“Any additional support for the U.K. economy would come at an opportune moment: The GDP growth estimate for March was –0.1% compared to February, and for April it was –0.3% versus March,” UBS CIO Mark Haefele’s team said in a note Friday.

“Another increase to the energy price cap means there is further pressure ahead, but while our base case is that the U.K. will narrowly escape recession, it is important to remember that the FTSE 100 generates just 25% of its revenues inside the U.K.”

As such, U.K. large-cap stocks are not particularly sensitive to domestic economic growth, and benefit from weakness of the pound; many FTSE 100 companies make profits in dollars which are therefore strengthened when the pound weakens against the greenback.

Strategists at asset manager Invesco agreed, highlighting that as long as sterling remains weak, investors may have opportunities to pick up “high-quality, international companies at a double discount.”

Sterling rose fractionally after Johnson’s resignation but gave back those gains and then some on Friday as global pressures continued to weigh on the pound. The FTSE 100 has remained largely impervious to the political turmoil, tracking gains across Europe.

UBS also noted that high exposure to both commodity-linked and “value” sectors – stocks which typically trade at a discount relative to their fundamentals – has supported the U.K. market of late and rendered it one of the Swiss bank’s preferred equity markets.

“The immediate outlook is likely to hinge on whether Johnson manages to stay on for the next two months – in which case markets risk a period of additional volatility going into the summer,” AXA IM’s Adegbembo said.

“However, if Johnson were replaced by another ‘caretaker’, the prospect of domestic policymaking would fall, something which should reduce any expected volatility.”

No clear front-runner has emerged to take over as leader of the Conservatives, with the field likely to be crowded and diverse. However, even once a new prime minister moves into Downing Street, the approval of any fiscal package to help consumers is not a foregone conclusion.

Invesco suggested that this uncertainty means the U.K. economy will continue to “wither” in the interim, and is most likely among developed economies to experience a recession this year.

Along with the global pressures of supply chain problems and the war in Ukraine, the U.K. is also dealing with the trade and economic fallout from Brexit, which Invesco’s multi-asset team said was fueling the inflationary fire on food and energy bills.

“It’s hard to turn more constructive on the U.K. economy right now. Not only are economic fundamentals weakening, but the profound risk of a policy error is significant,” Invesco strategists said.

“Given the current pressures, we think it’s become even harder for the government to unify around a clear strategy going forward.”

Despite being elected in 2019 on a promise to “Get Brexit Done” and touting his “oven-ready” exit deal with the European Union, Johnson’s government has continued to wrangle with Brussels over the operation of the Northern Ireland protocol, a key tenet of the withdrawal agreement signed by both parties.

S&P Global’s Glass suggested that a new government may try to repair relations with the EU by taking a more conciliatory approach to trade relations, but this outcome is far from guaranteed given the breadth of views within the Conservative Party.

“Judging by the early line-up of potential successors to Johnson, the balance of potential outcomes would tilt towards less strained relations with the EU,” said Berenberg Senior Economist Kallum Pickering.

“Even the ardent Brexiteer candidates (Penny Mordaunt and Liz Truss) are less of the populist variety than Johnson.”

Cause for long-term optimism?

Over time, less-fraught relations with the EU may also prove to be a catalyst for stronger business investment, offering a sustained path higher for sterling toward fair value of 1.40-1.45 against the dollar and 1.20-1.25 against the euro, Pickering suggested.

“Looking further out, a Conservative leadership election followed by a snap election during the new leader’s honeymoon phase is not unthinkable for late-2022 or early-2023. Both Johnson and May took the UK to the polls soon after becoming Conservative leader,” he added.

Beyond the immediate political volatility, however, Glass contended the U.K. continues to benefit from “strong institutional settings and a credible monetary policy.”

The Bank of England has begun hiking interest rates in a bid to rein in inflation, and S&P Global believes consumer prices will gradually be brought under control by mid-2024.

“Moreover, despite a weakening of the macroeconomic outlook, public finances have been stabilizing overall, with net general government debt projected to fall to 94% of GDP by 2025 from 96% at the end of 2021,” Glass said.