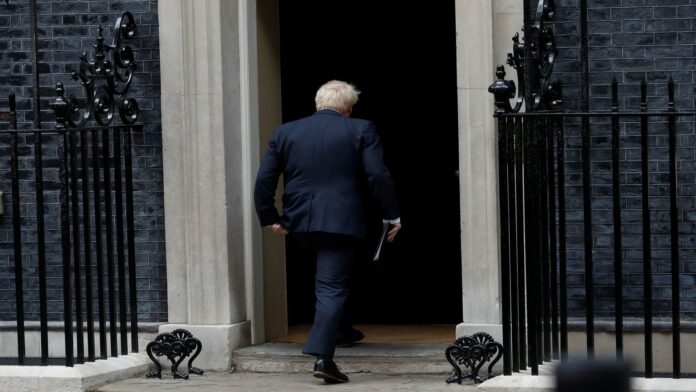 Johnson resigned as Conservative Party leader on Thursday, finally bowing to immense political pressure after an unprecedented flood of government resignations and a Cabinet revolt.

“Them’s the breaks,” Johnson said as he addressed the British public outside Downing Street. He added that he was “sad to be giving up the best job in the world” and conceded that “no one is remotely indispensable” in politics.

The 58-year-old former London mayor said he plans to stay on as caretaker prime minister while a successor is chosen, defying calls from across the political spectrum — including from some within his own party — to go immediately.

Johnson’s critics have insisted he must be pushed out as soon as possible, with Deputy Prime Minister Dominic Raab to act as caretaker in the meantime. However, other Tory lawmakers insist replacing Johnson could create even more instability, arguing that Johnson should remain in post over the summer period.

A timetable for the Tory leadership contest is due to be confirmed next week and a new prime minister is expected to be in place by September.

The contest to succeed Johnson as leader appeared to get underway even before his resignation was confirmed, with Attorney General Suella Braverman surprising many on Wednesday evening by announcing her intention to run.

As many as 10 candidates are expected to throw their hats in the ring, although there is currently no obvious front-runner to replace Johnson.

Tom Tugendhat, chairman of the Foreign Affairs Select Committee and a prominent critic of Johnson, launched his leadership bid on Friday in The Daily Telegraph. A former soldier, Tugendhat said he hoped to answer the call as prime minister with “new energy and ideas” for government.

Political analysts believe most have been secretly planning their campaigns for several weeks.

A snap YouGov poll which asked 716 Conservative Party members who they’d like to succeed Johnson found that Wallace and Mordaunt came out neck and neck, with 13% of those polled backing each of them, respectively. Sunak followed with 10% and Truss got 8%.

Notably, however, a separate YouGov poll comparing the individual candidates showed that Wallace was the clear favorite among Conservative Party members to be the next party leader.

How does it work?

A party leader is selected first by Conservative MPs, and then voted on by members of the Conservative Party.

To become the next party leader, candidates are required to have a proposer, seconder and a certain number of supporters. These conditions are designed to prevent too long a list. Once the candidates are known, the 358 Tory MPs in parliament will whittle them down to two over a series of votes.

Jonathan Portes, professor of economics and public policy at King’s College London, questioned the sense of the system.

“I think imposing some kind of stitched up prime minister on the country in a week or two doesn’t particularly make any sense,” he told CNBC’s “Squawk Box Europe” on Friday.

“Of course, you could make the broader argument that simply allowing 100,000 almost exclusively white male and middle-aged or retired Conservative members to decide who the prime minister of the country is isn’t a particularly good system and hasn’t delivered us particularly good results in the recent past.”

Britain’s Foreign Secretary Liz Truss leaves at the end of a cabinet meeting in Downing Street in London on July 5, 2022.

When it comes to the likely policies of the future leader, Mujtaba Rahman, managing director of Europe at political risk consultancy Eurasia Group, said he believed the candidates will likely commit to the 2019 Tory manifesto pledges. These include balancing day-to-day spending with revenue — with borrowing allowed only for capital projects — and see debt lower by the end of the five-year parliament.

“In practice, this will be hard to achieve; candidates will come under pressure to raise spending, notably on defence, a popular pledge in the party due to the new threat posed by Russia,” Rahman said.

“Policy on Ukraine itself will not change after Johnson’s departure; his successor will want to remain the country’s staunchest ally. The UK will continue to oppose a ‘bad peace’ which allows Vladimir Putin to keep his territorial gains in Crimea and the Donbas but senior Tories admit privately they “cannot be more Ukrainian than Ukraine” and accept they would be guided by Volodymyr Zelenskyy’s wishes,” he added.

What about the opposition?

Britain’s opposition Labour Party leader Keir Starmer has repeatedly called for Johnson’s departure from office, accusing the Tory party of “wallowing in sleaze” and criticizing Johnson over the so-called “partygate” scandal and for not telling the truth.

“Labour’s private fear is that the incoming prime minister will be greeted with relief by voters, enjoy a honeymoon period and allow the Tories to erode Labour’s average six-point lead in the opinion polls,” Rahman said.

“Starmer’s failure to build a bigger cushion while the Tories were in turmoil under Johnson may return to haunt him. However, the country’s new leader will take over during an economic crisis hurting millions of voters. This will allow Labour to run a strong ‘time for change’ message after 14 years of Tory rule by a 2024 general election,” he added.