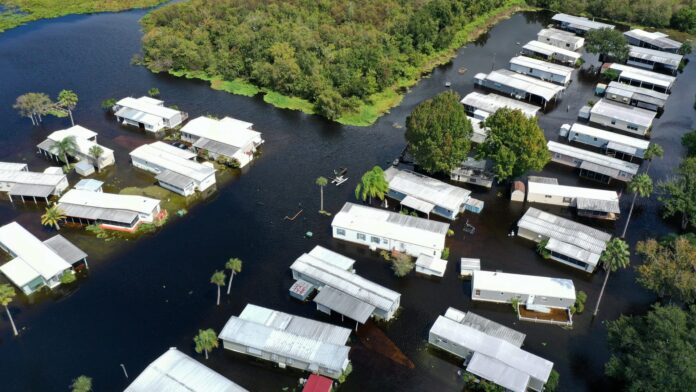 The Jade Isle Mobile Home Park is flooded in this aerial view from a drone in St. Cloud. Residents of the community were issued a voluntary evacuation order due to rising water levels in the aftermath of Hurricane Ian.

The U.S. must ramp up efforts to reduce greenhouse gas emissions over the next three decades as climate change fuels worsening disasters and threatens water supplies and public health across the country, according to a major draft report released by the federal government on Monday.

“The things Americans value most are at risk,” the National Climate Assessment authors wrote in the 1,695-page draft. “Many of the harmful impacts that people across the country are already experiencing will worsen as warming increases, and new risks will emerge.”

Climate-related disasters are causing economic losses through infrastructure damage, disruptions in critical services and losses in property values, the report said. The country has experienced an average of nearly eight billion-dollar disasters each year over the past four decades, but in the past five years has seen that average rise to nearly 18 events annually.

The report also described how millions of Americans could be displaced by climate disasters such as severe wildfires in the U.S. West and sea level rise in coastal cities. Climate change is also damaging regional economies by slashing crop yields in the Midwest and disrupting fishery operations in Alaska, among other things.

The authors highlighted how a slew of catastrophes fueled by climate change have disproportionately burdened U.S. communities that have lower carbon footprints.

“The effects of climate change are felt most strongly by communities that are already overburdened, including Indigenous peoples, people of color, and low-income communities,” the authors wrote. “These frontline communities experience harmful climate impacts first and worst, yet are often the least responsible for the greenhouse gas emissions that cause climate change.”

The report also called for action.

The country curbed emissions by 12% between 2007 and 2019 thanks to advances in renewable energy technology like wind and solar, and persistent reductions in coal use. But in order to meet the Biden administration’s target to achieve a net-zero economy by 2050, emissions must decline by more than 6% each year, the authors wrote.

“The threats to the people and places we love, our livelihoods, and pastimes can be reduced now through proactive, proven efforts to substantially cut emissions and adapt to unavoidable changes in ways that address inequities across the nation.”

The authors noted several actions with near-term benefits, such as accelerating low-carbon technologies, ramping up public transit, incentivizing renewable energy and electric vehicle purchases and improving cropland management. But they warned that many of the adaptation efforts put forth by states and cities are inadequately funded and just “incremental” rather than transformative.

A home burn as the Oak Fire burns through the area on July 23, 2022 near Mariposa, California.

“The worst consequences of climate change can still be avoided or limited by large scale actions that rapidly decarbonize the economy and prepare communities for impacts,” the authors wrote. “Longer-term planning and investment in transformative mitigation and adaptation offers the opportunity to create a healthier, more just, and more resilient nation.”

The congressionally mandated report comes as leaders across the world meet this week at the U.N. Climate Change Conference in Egypt to address methods and set targets to tackle climate change.

The full report is set for release in 2023 following a period of public comment and peer review. The government is required to release the National Climate Assessment every four years.