HomePoliticsHere are the states where recounts are likely
Politics

Here are the states where recounts are likely 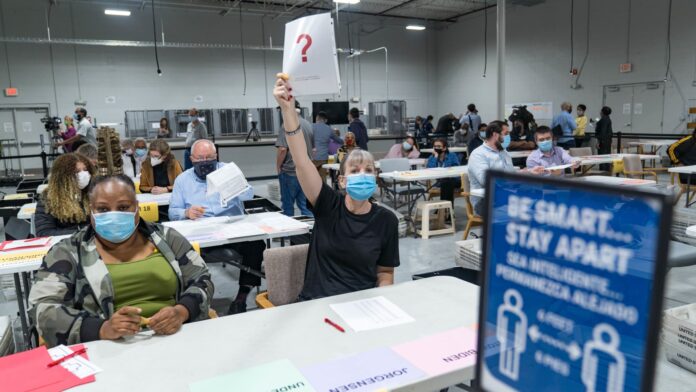 A Gwinnett county worker raises a piece of paper saying that they have a question as they begin their recount of the ballots on November 13, 2020 in Lawrenceville, Georgia.

The balance of power in the narrowly controlled Congress may not be known by the time polls close across America late Tuesday.

Several states have laws that require automatic recounts in tight races. Several Republican candidates have already said they plan challenge the results — if they lose — setting the U.S. up for another round of contentious and drawn out legal battles and recounts reminiscent of the 2020 race in which former President Donald Trump still falsely claims he won.

Recounts in that race were done in Georgia, Arizona and Wisconsin while election officials audited the results in Texas, Pennsylvania and Michigan.

Here are the states where recounts or audits that could delay final results are likely in 2022:

Sen. Ron Johnson, R-Wis., hasn’t said he’ll challenge the results if he loses his Senate seat, but he also hasn’t said he would automatically accept the results, the Washington Post reported last week.

“We’ll see what happens,” he told reporters during a campaign stop. “I mean, is something going to happen on Election Day? Do Democrats have something up their sleeves?”

Is the recount automatic? No, Wisconsin does not have automatic recounts, according to state law.

How is it requested? A candidate can request if the margin is less than or equal to 1% of the total votes cast in the election. If fewer than 4,000 votes were cast in the race, the requesting candidate must be within 40 votes of the winner.

The candidates have until 5 p.m. on the third day after the result is announced to provide a statement, verified under oath, that they believe there was a mistake, irregularity, or fraud made in the count or return of ballots.

In the 2020 election, the Trump campaign paid $3 million for a recount of Wisconsin’s Milwaukee and Dane Counties, around $545,000 was refunded to the campaign after the count.

Democratic gubernatorial candidate Stacey Abrams did not initially concede her 2018 gubernatorial loss to current Gov. Brian Kemp, a Republican, citing voter suppression efforts. Both candidates face off again Tuesday for the same office, but they’ve committed to accepting the results.

So, too, have Senate candidates Herschel Walker (R-GA) and Raphael Warnock (D-GA), according to the Washington Post.

Is the recount automatic? No, state law does not require an automatic recount.

How is it requested? A candidate can request a recount if the margin is less than or equal to 0.5% of the total votes cast in the election. The candidate has two business days after the results are certified to ask the Secretary of State for a recount.

How is it funded? Both the recount and the risk-limiting audit are paid for with taxpayer money, according to the Georgia Secretary of State’s office.

Is the recount automatic? No, state law requires a recount to be requested.

How is it requested? There is no margin requirement for a request. A candidate must file a sworn request with a “good-faith belief” that they would have won the election if not for fraud or a mistake. They also must state the nature of that fraud or mistake to the best of their ability.

They must file within six days of the initial certification.

How is it funded? The candidate must provide at least $25 per precinct requested.

The candidate is refunded if the recount reveals a fraud or mistake that changes the winner of the election.

Is the recount automatic? Yes, if the margin is less than or equal to 0.5% of the total votes cast in the election, according to state law. Otherwise, the recount must be requested.

How is it requested? There is no margin requirement for a request. A candidate must file a request within five days of the election.

How is it funded? The petitioner pays the recount fee. They are refunded if the recount reveals substantial error or fraud.

Republican gubernatorial candidate Kari Lake, who is endorsed by Trump and campaigning on false claims of fraud in the 2020 presidential election, would not commit to accepting the results of her election in an interview on CNN. She instead said: “I’m going to win the election, and I will accept that result.”

Republican Senate candidate Blake Masters, who’s been endorsed by Trump and backed by billionaire Peter Thiel, has been laying the groundwork for a recount for months.

Is the recount automatic? Yes, if the margin between a candidate and the winner is less than or equal to 0.5% the total votes.

How is it requested? A non-mandatory recount cannot be requested.

How is it funded? The recount is funded by the state.

“I’m not counting on it,” O’Rourke told the publication. “His open embrace of former the president, Trump, who himself tried to subvert this democracy.”

Is the recount automatic? Only if two candidates tie, state law says.

How is it requested? A losing candidate can file a petition if the margin of their loss is less than 10% of the total number of votes received by the winner.

How is it funded? The petitioner pays a deposit for compensation of the recount committee members, the use of automatic tabulating equipment, $15 to each recount supervisor and $50 to the recount coordinator. If the outcome of the election is changed by the recount, the deposit is returned to the petitioner.

When asked if he would accept the election results, Sen. Marco Rubio (R-FL) said  “Sure, because I’m going to win,” according to NPR.

The outlet says he later clarified that “no matter what the outcome is, I’ll support it, because Florida has good laws. They’re not some crazy laws like they have in Pennsylvania and these other places.” His Democratic opponent, Val Demings, did not give a clear answer to the question, according to Fox News.

Is the recount automatic? Yes, if the margin between a candidate and a winner is less than 0.5% of the total votes cast.

How is it requested? The secretary of state is responsible for ordering a manual recount, according to state law. Candidates cannot request recounts.

How is it funded? The state funds the recounts.

5 things to know before the stock market opens Tuesday