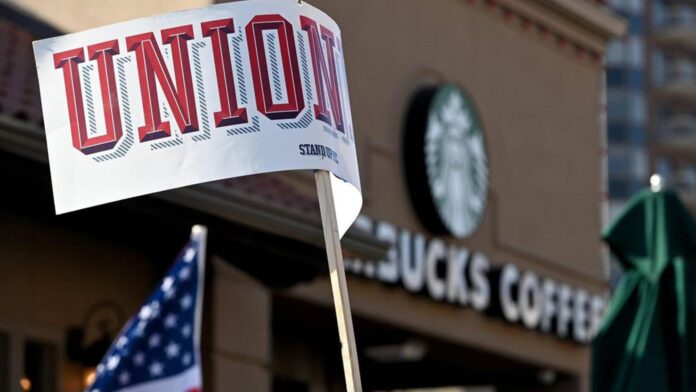 A protester waves a sign near the Country Club Plaza Starbucks store where dozens of Starbucks employees and union supporters protested alleged anti-union tactics by the company Thursday, March 3, 2022.

Starbucks is telling its baristas that unionizing could jeopardize the gender-affirming health care coverage for transgender employees that the company offers, according to a complaint filed with the federal labor board.

The complaint comes after more than 100 of the coffee chain’s 9,000 U.S. cafes have voted to unionize under Workers United in the last seven months. Under interim CEO Howard Schultz, Starbucks has been trying to counter the union push by emphasizing the potential shortcomings of collective bargaining, such as federal labor laws that prohibit the company from unilaterally hiking wages across unionized cafes without contract negotiations.

The union’s latest complaint against Starbucks, first reported by Bloomberg, was filed Monday. A transgender employee at an Oklahoma City location told the publication that she believed her manager used a “veiled threat” in a conversation. The manager reportedly told the employee that her benefits could improve, stay the same or worsen if the store unionized and referred specifically to her use of the trans health-care benefits.

The company’s health insurance has covered gender reassignment surgery since 2012 and a wider array of gender-affirming procedures, such as hair transplants or breast reduction, since 2018. Last month, the coffee chain announced it would cover travel expenses for gender-affirming surgeries as state lawmakers target transgender rights.

As of mid-March, more than 150 anti-trans bills had been introduced in state legislatures seeking to limit access to health care, sports, bathrooms and education, according to NBC News. Oklahoma, for example, has passed three anti-trans laws this year.

Starbucks often touts its long history of supporting LGBTQ+ workers and the broader community, particularly during Pride Month in June. The company notes its decades-old policies including health care coverage for same-sex domestic partnerships and employees with terminal illnesses, which was inspired by a Starbucks worker who died of complications from AIDs.