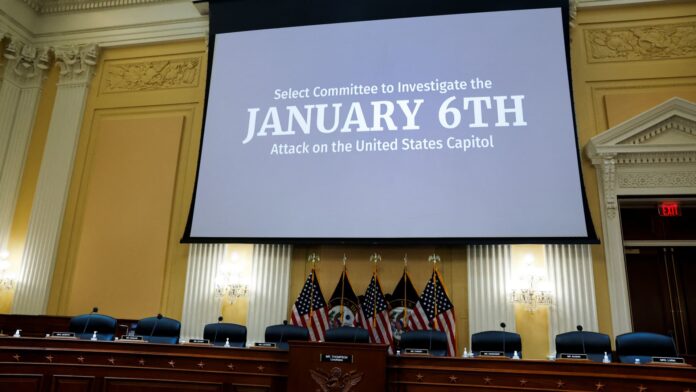 Empty chairs are seen before the opening public hearing of the U.S. House Select Committee to Investigate the January 6 Attack on the United States Capitol, on Capitol Hill in Washington, U.S., June 9, 2022.

The House select committee investigating the Jan. 6 Capitol riot is postponing its third hearing, which was scheduled on Wednesday and was expected to detail how former President Donald Trump allegedly pushed the Department of Justice to spread his false claims that the 2020 election was rigged against him.

The committee hasn’t set a new date for the hearing, but it’s already scheduled to hold a separate hearing on Thursday, the committee said.

It was unclear from the panel’s statement whether those witnesses will be moved to Thursday or another date, and a spokesperson for the committee did not immediately respond to a request for comment.

The committee kicked off a series of seven hearings Thursday detailing its initial findings from an almost yearlong investigation of the Jan. 6, 2021 attack, when a violent mob of Trump’s supporters stormed the U.S. Capitol. The riot sent members of Congress fleeing for safety and delayed lawmakers from confirming President Joe Biden’s Electoral College victory.

The nine-member panel seeks to show that Trump is chiefly to blame for the riot by placing him at the center of a multi-pronged conspiracy to overturn his loss in the 2020 election.

On Monday, the committee released details that focused heavily on the wide array of election-fraud conspiracies that Trump and some of his allies seized on and spread widely to try to convince the public that the election was stolen.

The committee played a lengthy series of clips from interviews with former Trump officials, including former Attorney General William Barr, who repeatedly told the former president that he lost to Biden legitimately and warned Trump against making meritless claims of fraud.

“I told him that it was crazy stuff and they were wasting their time on that and it was doing a grave disservice to the country,” Barr told investigators.

The now-postponed hearing on Wednesday was supposed to show how Trump tried to “corruptly” wield the DOJ as part of his bid to challenge the 2020 election, and how the agency’s leaders pushed back on him, committee Vice Chair Liz Cheney, R-Wyo., said last week.

Cheney, one of two Republicans on the panel, suggested that hearing would detail Trump’s attempt to install Jeffrey Clark, a DOJ lawyer, as acting attorney general and have him send letters to key states falsely claiming that the government has found evidence that could impact the election results.

The hearing would reveal how top officials in the DOJ threatened to resign and confronted Trump and Clark in the Oval Office, Cheney said.

She also suggested that the hearing would shed new light on efforts by some Republican lawmakers to secure presidential pardons “for their roles in attempting to overturn the 2020 election.” She has already named Rep. Scott Perry, R-Pa., who allegedly tried to get Clark promoted. Perry has refused to testify before the committee.

It is unclear whether the topic at Thursday’s hearing will be the DOJ, or whether the committee will move on to its next scheduled area of focus: how Trump pressured then-Vice President Mike Pence to reject Electoral College votes.

Biden urges Americans to travel early with a massive blizzard slated to hit the U.S.