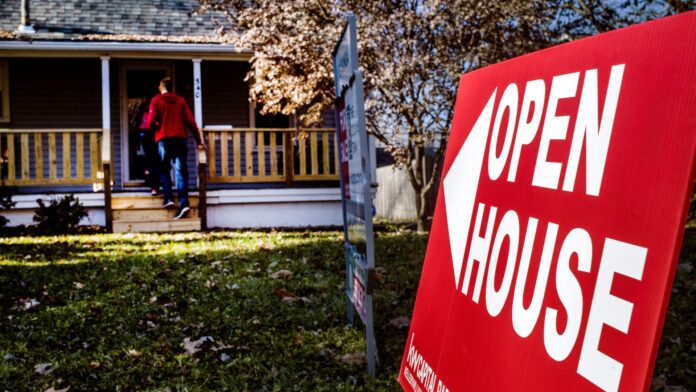 An ‘Open House’ sign is displayed as potential home buyers arrive at a property for sale in Columbus, Ohio.

Rising mortgage rates, high home prices and uncertainty in the overall economy have Americans feeling more pessimistic about the state of the housing market.

Fannie Mae’s survey looks not just at buying and selling but tests sentiment about home prices, mortgage rates and the job market. It combines them all into one number, which also fell for the eighth straight month and now sits at a new low.

A higher share of consumers, 37%, said they expect home prices to drop in the next twelve months. That compares with 35% in September. More also believe mortgage rates will rise.

Fast-rising interest rates are what turned the red-hot housing market on its heels in early summer. The average rate on the popular 30-year fixed mortgage started the year near a record low, around 3%. By June it crossed 6%, and it’s now just over 7%, according to Mortgage News Daily.

“As continued affordability constraints reduce homebuyer demand, and homeowners become reluctant to sell at potentially reduced prices, we expect home sales to slow even further in the coming months, consistent with our forecast,” wrote Doug Duncan, Fannie Mae’s chief economist in a release.

Home prices dropped again in September, according to Black Knight, albeit at a slower monthly pace than they did in July and August. Prices are now down 2.6% since June, the first 3-month decline since 2018, when interest rates also rose. It is the worst 3-month stretch for home prices since early 2009. Prices, however, were still 10.7% higher in September than the same month last year.