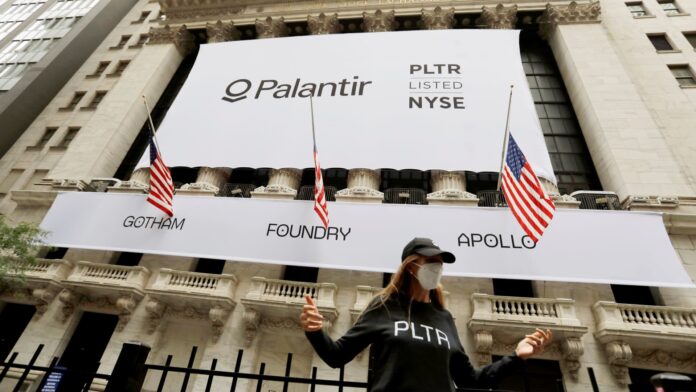 A person poses in front of a banner featuring the logo of Palantir Technologies (PLTR) at the New York Stock Exchange (NYSE) on the day of their initial public offering (IPO) in Manhattan, New York City, U.S., September 30, 2020.

Shares of Palantir fell more than 10% Monday after the company released third-quarter earnings that missed analyst estimates for earnings but beat on revenue.

In a letter to shareholders, Palantir CEO Alex Karp said the company is in the “early stages of a significant transformation.”

Karp said Palantir anticipates regional markets within the U.S., such as the Midwest, Southeast, Texas and New England, could develop into billion-dollar businesses. However, Karp said that countries in continental Europe have been less willing to introduce “software systems that challenge existing habits.”

“We have found that large institutions in the United States have been far more willing to investigate the most significant sources of systemic dysfunction within their organizations, which in the current moment often relate to the ability or rather inability of an institution to metabolize its own data,” he said.

Palantir said it expects to report between $503 million and $505 million in revenue during the fourth quarter, on a par with analyst estimates of $503 million according to StreetAccount.

“We are building the digital infrastructure that makes continued industrial progress in late capitalism possible,” Karp said in the letter. “The metaverse and other idiosyncratic pursuits of the technocratic elite may be luxury goods. But foundational data platforms are not.­­­”