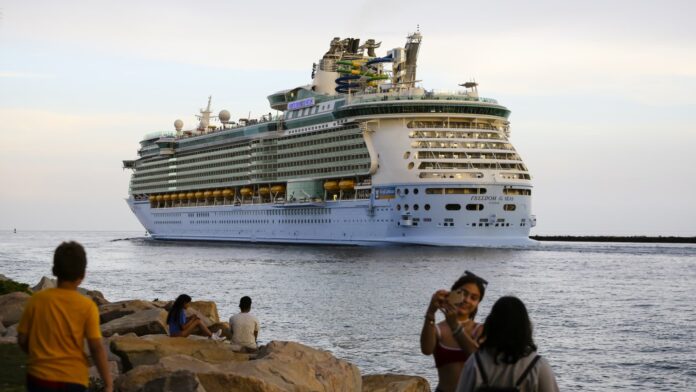 Despite new signs of slowing consumer demand, pockets of strength remain in travel, payments and autos. Hilton on Wednesday topped analysts’ second-quarter estimates and raised its full-year outlook, saying it remained optimistic there would be strong travel demand for the rest of the year. On Thursday morning, Southwest Airlines reinforced this view as it beat quarterly estimates and predicted its next quarter would top its prepandemic performance . Airlines are dealing with capacity constraints and soaring costs, but there is a pent-up desire to travel. “Travel demand surged in the second quarter, and thus far, strong demand trends continue in the third quarter,” CEO Bob Jordan said. Royal Caribbean is also benefiting from the trend. The cruise line, which beat estimates , said, “Booking volumes received in the second quarter for the back half of 2022 sailings remained significantly higher than booking volumes received in the second quarter of 2019 for the back half of 2019.” Credit card companies have been showing no signs of a letup in consumer spending, too. Remember, American Express reported very strong travel and entertainment spending . Both it and Visa beat estimates within the past week. Visa saw payment volumes jump 12% in the quarter. MasterCard added to the string of excellent reports this morning, handily topping estimates. And here’s the key line in the release from CEO Michael Miebach who said, “Increasing inflationary pressures have yet to significantly affect overall consumer spending.” Automakers seeing pricing power Car retailers such as CarMax and AutoNation have discussed how demand is still relatively strong for cars. That was the sentiment from Ford on Wednesday, too. The automaker’s second-quarter net income rose nearly 19%, driven by a 50% jump in revenue. Notably, Ford said consumers are willing to pay up when it has cars in stock to sell. “We have really strong order banks continuing, significant pent up demand, and our products are actually selling as quickly as we can produce them,” CFO John Lawler said. “We have not seen a slowdown in the industry,” he added. CEO Jim Farley also chimed in saying, “Given the constraints that we have, demand is still higher than we can supply.” A different story for tools and gadgets But clearly consumers are making choices as they budget their dollars. Best Buy’s profit warning on Wednesday offered a great example of where spending is weakening. The consumer electronics giant lowered its fiscal second-quarter outlook , saying it expects its fiscal 2022 same-store sales to drop 11%. In May, Best Buy had predicted a decline of between 3% and 6%. “As high inflation has continued and consumer sentiment has deteriorated, customer demand within the consumer electronics industry has softened even further, leading to Q2 financial results below the expectations we shared in May,” Best Buy CEO Corie Barry said. Stanley Black & Decker also warned about its second-quarter performance, sending shares down 12% in trading Thursday. CEO Donald Allan said he is observing a “softening of the demand environment” with “significantly slower demand in late May and June.” The company expects lower second-half revenue primarily driven by slowing sales of tools and outdoor products, and it moderated its expectations for price. As a result, it drastically slashed its full-year EPS outlook to $5 to $6 from $9.50-$10.50. Analysts surveyed by Refinitiv were expecting Stanley to earn $9.66. Talk about ugly. Jefferies analyst Jonathan Matuszewski, who covers Best Buy, warned investors should be prepared for more pain ahead as he downgraded the retailer’s stock . “A recession label for the US economy is being debated, but a discretionary goods recession is here,” he added.