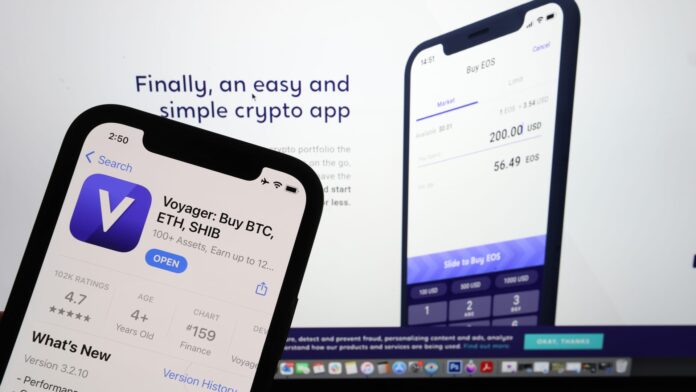 Voyager said it has roughly $1.3 billion of crypto on its platform and holds over $350 million in cash on behalf of customers at New York’s Metropolitan Commercial Bank.

Voyager commenced bankruptcy proceedings in the U.S. Bankruptcy Court of the Southern District of New York on Tuesday, according to a filing from the company. The filing lists assets of between $1 billion and $10 billion, and liabilities in the same range.

In a statement, the company said it has roughly $1.3 billion of crypto on its platform and holds over $350 million in cash on behalf of customers at New York’s Metropolitan Commercial Bank.

Voyager suffered huge losses from its exposure to crypto hedge fund Three Arrows Capital, which went bust last week after defaulting on loans from a number of firms in the industry — including $650 million from Voyager.

“We strongly believe in the future of the industry but the prolonged volatility in the crypto markets, and the default of Three Arrows Capital, require us to take this decisive action,” Voyager CEO Stephen Ehrlich said in a tweet early Wednesday.

The Toronto-listed firm’s shares have lost nearly 98% of their value since the start of 2022.

Voyager says it is still pursuing the recovery of funds from Three Arrows Capital, or 3AC as it’s otherwise known, including through court-supervised proceedings in the British Virgin Islands and New York.

Last week, Voyager paused all withdrawals, deposits and trading on its platform due to “current market conditions.” Ehrlich at the time said Voyager was seeking additional time to explore “strategic alternatives with various interested parties.”

Several other firms, including Celsius, Babel Finance and Vauld, have taken similar steps. On Tuesday, Vauld received a takeover offer from Nexo, a rival firm, after suspending its services.

The crypto market is grappling with a severe liquidity crisis as platforms struggle to meet a flood of withdrawals from customers amid a sharp fall in digital currency prices.

The declines in crypto started with a broad fall in risky assets as the Federal Reserve embarked on monetary tightening, and gathered pace following the collapse of Terra, a so-called stablecoin venture that was worth around $60 billion at its height.

Bitcoin, the world’s largest token, had its worst month on record in June, plunging 38%. Investors are bracing for a much longer downturn in digital currencies known as “crypto winter.”

Voyager said the move would allow it implement a restructuring process so that customers can be reimbursed.

If all goes according to plan, users would receive a combination of crypto in their accounts, proceeds from the recovery of funds from Three Arrows Capital, shares of the newly reorganized company, and Voyager tokens.

Clients with U.S. dollar deposits will regain access to their funds once a reconciliation and fraud prevention process with Metropolitan Commercial Bank is complete, Voyager said.

Alameda Research, the quant trading shop of billionaire Sam Bankman-Fried, had extended Voyager a line of credit worth $500 million in cash and crypto last month in a futile attempt to tide the company over.

Alameda was listed as Voyager’s largest creditor in the bankruptcy filing Tuesday, with an unsecured claim of $75 million.

Bankman-Fried, who also founded the crypto exchange FTX, has become a lender of last resort for the troubled industry. He recently agreed a deal giving FTX the option to buy crypto lending company BlockFi for up to $240 million — a dramatic drawdown from the $3 billion it was last privately valued at.

Some have likened Bankman-Fried’s efforts to the role played by John Pierpont Morgan in rescuing Wall Street lenders from collapse after a series of bank runs known as the panic of 1907, which preceded the establishment of the Fed.

Oil could plummet to the $60s if a recession hits, Citi speculates

Retailers have a big inventory problem. Here are stocks most at risk