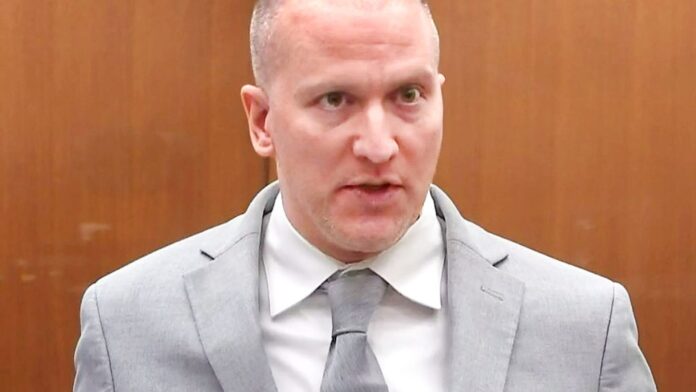 Former Minneapolis police officer Derek Chauvin addresses his sentencing hearing and the judge as he awaits his sentence after being convicted of murder in the death of George Floyd in Minneapolis, Minnesota, June 25, 2021 in a still image from video.

Derek Chauvin was sentenced to just more than 20 years in prison Thursday, nearly seven months after he pleaded guilty to federal charges that he violated George Floyd’s civil rights when he knelt on Floyd’s neck for 9½ minutes as he was detaining him in May 2020.

Federal prosecutors had asked U.S. District Judge Paul Magnuson to sentence Chauvin to 25 years, on the high end of the 20- to 25-year range of the plea agreement, saying Chauvin abused his authority as a police officer and acted callously.

The defense had asked for 20 years, saying Chauvin was remorseful for what he did and that he has accepted responsibility.

Magnuson sentenced Chauvin to 21 years in prison, with credit for the time he has already served.

Chauvin is already serving a 22½-year sentence after he was found guilty of second- and third-degree murder, as well as second-degree manslaughter, in April 2021 in a state case for the death of Floyd. His federal sentence will be served concurrently.

Chauvin initially pleaded not guilty to the federal charges, but he changed his plea in December. At the time, he also admitted guilt in a separate federal indictment in connection with allegations that he deprived a 14-year-old boy of his civil rights in an encounter in September 2017.

The guilty plea allowed Chauvin to avoid another high-profile trial.

Chauvin spoke briefly before he was sentenced, telling the Floyd family that he wished them “all the best in their life.”

Three other former officers at the scene of Floyd’s death — Thomas Lane, J. Alexander Kueng and Tou Thao — were convicted in February on federal charges of depriving Floyd of his civil rights. Kueng and Thao were also convicted of not intervening to stop Chauvin from using excessive force. Their sentencing dates have not been scheduled.

The four officers’ encounter with Floyd in May 2020 was captured on video recorded by a bystander, a traffic camera and the officers’ bodycams. On the recordings, Thao is seen standing between onlookers as his fellow officers pin Floyd to the pavement. Lane and Kueng are on top of Floyd as Chauvin applies pressure to Floyd’s neck. The officers had been responding to a call from a convenience store about a counterfeit bill.

Floyd’s killing at the hands of police spurred protests against systemic racism and police brutality around the world.